Ingersoll Rand P250 WJD Air Compressor found the same day it was stolen, less than a mile from the site from which it was stolen 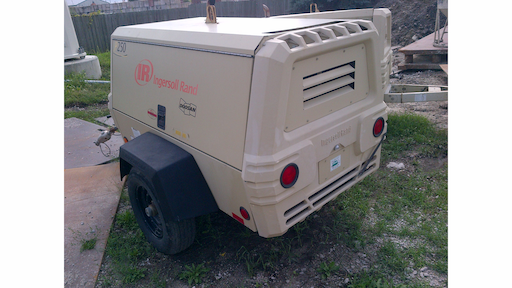 On August 22, 2014, the General Manager of a construction site contacted the Naperville, Ill., police department to report a 2009 Ingersoll Rand P250 WJD Air Compressor missing from his job site. Naperville Police Department verified the theft and entered the vehicle information into the state and federal crime computers which automatically activated the LoJack System concealed in the Ingersoll Rand Air Compressor.

Within an hour of the Ingersoll Rand Air Compressor being activated, a vehicle equipped with the LoJack stolen vehicle tracking computer began to pick up the audible and directional signals being broadcast by the stolen air compressor.  Following directional and audible cues emanating from the stolen air compressor to its location, the Ingersoll Rand was found parked at a different job sit along Route 34 in Naperville less than a mile and a half from reported location of steal. The Naperville Police Department were summoned and arrived on scene to recover the stolen 2009 Ingersoll Rand Air Compressor. The victim stated that the air compressor was recovered at a job site that he wasn’t contracted to work at. The police investigation into this recovery continues.

The 2009 Ingersoll Rand was recovered undamaged and returned to its grateful owner.

The LoJack®System was installed in the 2009 Ingersoll Rand on 7/17/2009 at a commercial site in Romeoville Ill.