The roll back will speed up construction projects but could undermine NEPA’s goal of placing consideration of a project’s environmental effects on the same level as economic and other considerations. 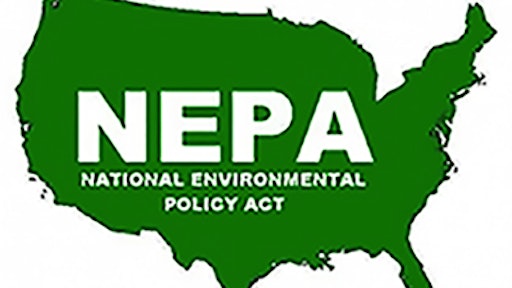 The Trump administration Council on Environmental Quality (“CEQ”) promulgated final rule with the most sweeping changes to the regulations since the CEQ initially promulgated them in 1978. Many of the changes are welcome and will improve the environmental review process under the National Environmental Policy Act (“Act”). But some are highly controversial and appear to undermine NEPA’s goal of placing consideration of a project’s environmental effects on the same level as economic and other considerations.

President Nixon signed NEPA into law on January 1, 1970. Although the Senate sponsor hailed the law upon enactment as “the most important environmental statute ever enacted,” the statute is skeletal in nature and lacks detail. Theodore J. Lowi, a professor of government at Cornell University, in his 1971 book The Politics of Disorder opined that “NEPA states a whole lot of lofty sentiments . . . but there is no law to be found anywhere in the act.” For the NEPA’s first eight years, there were no regulations construing the statute, but there were numerous federal court decisions, including United States Supreme Court decisions, interpreting the law. In 1978, the CEQ promulgated a comprehensive set of regulations governing federal agency implementation of NEPA which largely codified federal decisions in the statute’s first eight years. CEQ has issued numerous guidance documents on statutory implementation since 1978 but has made only limited modifications to its NEPA rules.

The Trump administration’s final rule changes all that. The final rule makes substantial and substantive modifications to virtually substantially every significant CEQ rule. Many of the modifications will improve a NEPA environmental review process that often takes too long and costs too much. For example, the final rule establishes a presumptive time limit of two years for the preparation of environmental impact statements (EISs) and one year for the preparation of environmental assessments (EAs), and presumptive page limits. The presumptive time and page limits, which federal agencies may modify for more complex projects, should encourage more efficient action by agencies. Where NEPA review of a single project involves multiple agencies, which is common for larger projects with a number of environmental permits and approvals, the new rules require federal agencies to establish joint schedules, prepare a single EIS, and issue a single record of decision approving the EIS, where appropriate. Lead federal agencies also will have a stronger role in resolving disputes with other agencies cooperating in the NEPA review process. And the rules should reduce duplication by facilitating use of documents prepared by State, Tribal and local agencies to comply with NEPA..

But certain provisions in the new rule appear to undermine NEPA. The most significant change in the CEQ rules is the modification of the definition of the term “effects.” The term is undefined in NEPA’s statutory language but the former CEQ rules defined both direct and indirect effects. The former rules also required an evaluation of “cumulative impacts,” which it defined as a project’s incremental impact “when added to other past, present, and reasonably foreseeable future actions  . . . .”

The new CEQ rule no longer expressly eliminates cumulative impact analysis, as did the proposed version of the rule published for public comment in January 2020. But the final rule still eliminates the distinction between “direct” and “indirect” effects, and repeals the “cumulative impact” definition. In place of the former definitions, the new CEQ rule requires analysis of only those “effects” that are reasonably foreseeable and have a reasonably close causal relationship” to the proposed action. In making these changes, the new rule appears to be an attempt to narrow the scope of NEPA analysis and potentially eliminates the need to assess climate change in NEPA reviews. Although numerous federal courts hold climate change must be a part of a NEPA review, CEQ claims it may change the rule because “the terms direct and indirect effects[,] and cumulative impact do not appear in the statute and thus their use is not required by NEPA.” CEQ Response to Comments at 465. That conclusion is certain to draw a legal challenge.

There are two significant changes under the rule which, although controversial, appear to be consistent with NEPA’s purpose of placing environmental considerations on the same level as economic and other considerations ensuring. The first would allow project proponents to assume a greater role in preparing EISs with appropriate disclosure of financial or other interests and with supervision and independent evaluation by the agency.

In reality, the change in the final rule simply extends to the EIS the flexibility project proponents have long had in preparing EAs. The process has worked well for EAs and should also work well in preparing EISs, so long as federal agencies carefully evaluate the project proponent’s work product and conduct an independent evaluation of the draft EIS analysis. Public comment on an EIS remains unchanged and provides the public with the ability to submit information criticizing the work of the federal agency. The comment public process should ensure agencies do not act as mere rubber-stamps for EISs, just as it has in the EA process.

A second controversial change in the new rule that appears consistent with NEPA’s purpose is the change in the definition of “major federal action.” NEPA’s statutory language requires a “detailed statement” for “major Federal actions significantly affecting the quality of the human environment,” but does not define the term “major federal action.” Although the CEQ rules offered a definition in the 1978 rules, federal courts have continued to struggle with when NEPA applies. Known as the “small federal handle” problem, the analysis focuses on how much federal funding or control “federalizes” a project and triggers NEPA review. The new rule attempts to resolve the issue by stating NEPA does not apply where a federal agency’s role involves “minimal” federal funding or control. According to the CEQ response to comments on the draft rule, this changes codifies case law distinguishing the federal role (that is, the “major federal action”) from a proposed project’s degree of environmental effects. Other cases that focus on the consideration of effects before determining NEPA does not apply are wrongly decided, according to the CEQ. The clarification in the new CEQ rule may make resolving the issue a bit easier for the courts.

Given its sweeping changes, the new CEQ rule revisions will be challenged. However, those challenges will face some unusual hurdles. Under the NEPA statute, federal agencies to must report the environmental impacts of their actions that significantly affect the quality of the human environment. NEPA’s statutory language commands virtually nothing else. To prevail in a challenge of the new CEQ rules, litigants will have to establish the changes are inconsistent with a law force federal agencies to alter environmental review such that it no longer meets the a statute that Professor Lowi described as having “no law to be found anywhere in the act.

About the Author: Thaddeus Lightfoot has spent almost three decades specializing in environmental law. Lightfoot was previously a trial attorney with the US Department of Justice and is now a partner at Dorsey & Whitney law firm.

If your engineering, construction or architectural firm is evaluating drone adoption or expansion, here are some of the top value factors to consider.
Donavon Graves
Feb 25th, 2021
Latest

While Biden met with labor leaders to discuss our failing infrastructure, another 300 groups sent a letter to Congress urging immediate action on the issue
Jessica Lombardo
Feb 18th, 2021

Experts say the highway materials sectors need to push for higher amounts of funding for a robust surface transportation bill and to do that, Congress needs to enact a sustainable and equitable funding mechanism for the Highway Trust Fund
Jessica Lombardo
Feb 17th, 2021

Companies in the construction industry that are slow to adopt technology will fall behind their competition
Jessica Lombardo
Feb 2nd, 2021

With the federal gas tax at 18.4 cents per gallon since 1993, states have had to raise revenues to cover a more-than-125% increase in construction costs. 61 transport-funding measures started making their way through legislatures in January
Jessica Lombardo
Feb 15th, 2021

Who won the first Hops & Highways Yeti can coozie? How many construction contractors plan to get the COVID-19 vaccine? What are the top maintenance items you should check on your asphalt roller? Answers to all these questions and more on Hops & Highways
Jessica Lombardo
Feb 12th, 2021

The 2021 Texas Infrastructure Report Card was unveiled this week, indicating the state improved slightly since the 2017 Report Card with the grade of C
Jessica Lombardo
Feb 10th, 2021

Congress may push an infrastructure financing bill into the second quarter as other priorities could impede on Biden's 100-day plan.
Jessica Lombardo
Feb 9th, 2021

This week, Jess & Dormie catch you up on the latest road bulding news and share a beer with Marvin Joles from Wis-Coat Maintenance. He talks to us about how to market your construction company using social media.
Jessica Lombardo
Feb 5th, 2021

Workers in the pipeline construction industry face an uncertain future, not only on Keystone XL but longer term as jobs move to other energy sectors.
Becky Schultz
Feb 5th, 2021

Here's how Pete Buttigieg's plan to address our nation's crumbling infrastructure, outlined in his presidential campaign, might shape his role and policy at the US DOT
Jessica Lombardo
Feb 3rd, 2021

The Missouri-based company self-performs nearly 75% of the work, allowing the project to be completed ahead of schedule
Jessica Lombardo
Feb 3rd, 2021

This week, Jess & Dormie talk to Laura Williams from Lakeland Asphalt who is also Vice-Chairwoman of the Michigan Branch of Women of Asphalt. We also discuss ways to attract more women to this male-dominated industry.
Jessica Lombardo
Jan 29th, 2021

You have until Friday, April 23rd 2021, to complete the Top Contractor Survey for consideration in the June/July issue of Pavement Magazine
Jessica Lombardo
Jan 27th, 2021

The Biden-Harris administration has nominated a broad slate of appointees to take over crucial positions within the U.S. Department of Transportation.
Jessica Lombardo
Jan 25th, 2021

OSHA-related content dominated the news this week as Biden announced his plans to increase enforcement of violations, especially those specific to COVID-19. We discuss the top 10 OSHA violations and how to avoid them.
Jessica Lombardo
Jan 22nd, 2021

Newly appointed President of the United States, Joe Biden, plans to spend $2 trillion on infrastructure, including $50 billion on road and bridge repairs in his first year in office.
Dormie Roberts
Jan 20th, 2021

This week, Jess & Dormie talk about how recruiting workers to the industry has changed as a result of COVID and share tips on how to retain your best workers. We also catch you up on the latest news and share your hard work during Build America Friday.
Jessica Lombardo
Jan 15th, 2021
Follow Us