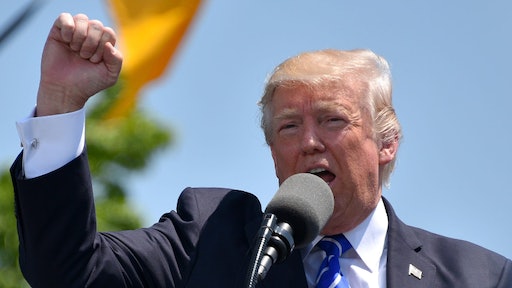 President Trump announced on July 15 a final rulemaking that slashes the scope of the National Environmental Policy Act (NEPA), signed into law by President Richard Nixon, that requires federal agencies consider the environmental effects of infrastructure projects before they are approved. It also gives the public and interest groups the ability to comment on those evaluations.

NPR.org reports the administration's new regulations are expected to reduce the types and number of projects that will be subject to review under the NEPA, shorten the timeline for reviews, and drop a requirement that agencies consider the cumulative environmental effects of projects, such as their contribution to climate change.

The administration's rule changes set a strict two-year time limit for agencies to issue environmental impact statements. The new regulations also require comments be submitted more quickly, and limit the topics that can be covered in those comments.

"The modernization of these critical regulations will go a long way toward eliminating unnecessary delays that cause budget overruns in construction,” said Associated Builders and Contractors Vice President of Legislative & Political Affairs Kristen Swearingen. “Construction businesses recovering from the ongoing health and economic crisis caused by COVID-19 will surely benefit from these modifications, which will help reduce costs and speed up project approvals.”

The changes are considered to be a major victory for the petroleum industry. In just the last week, environmental reviews have sidelined a series of controversial oil and gas pipeline projects, including the Keystone XL, the Dakota Access and the Atlantic Coast pipelines.

Bipartisan support for NEPA in 1969 was dedicated to balancing commercial progress with the value its advance was extracting from the quality of U.S. air, water and the rest of the environment. The law was also designed to give voice to communities long hurt by pollution from highways, pipelines and chemical plants that are disproportionately located where they live.

"NEPA gives poor and communities of color a say in the projects that will define their communities for decades to come. Rather than listen, the Trump administration's plan aims to silence such voices," Sharon Buccino, a senior attorney at the Natural Resources Defense Council, said about this week’s rollback.

Buccino and other environmental lawyers believe the new regulations are illegal and say they will be challenged in court.

WRDA 2020, which unlocks $10 billion in additional funds from the Harbor Maintenance Trust Fund Balance and authorizes construction on 46 pending Army Corps Chief’s Reports projects, will now head to the Senate for a final vote.
December 10, 2020
Follow Us