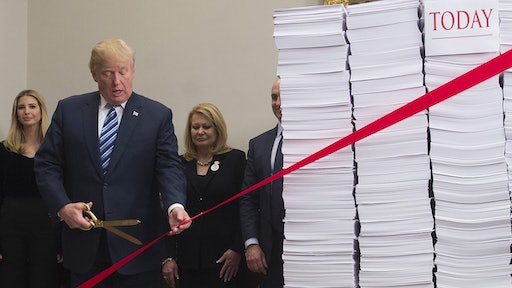 According to the White House Council of Economic Advisers (CEA), President Trump’s deregulation program is projected to boost household incomes by $3,100 annually in the coming years.
SAUL LOEB/AFP/GETTY IMAGES

“We heartily endorse President Trump’s steadfast commitment to speed up the delivery of transportation projects, while keeping environmental safeguards in place.

“Maximizing the benefits of the president’s NEPA reforms is another in a long line of reasons for Congress to complete action on a robust, multi-year surface transportation investment bill before the current law expires Sept. 30.”

Bauer was among a select group of business leaders present at a Jan. 9 White House event as President Trump first announced the NEPA modernization. In addition to submitting comments supporting the rule, ARTBA also testified at public hearings in Denver and Washington, D.C.

According to the White House Council of Economic Advisers (CEA), President Trump’s deregulation program is projected to boost household incomes by $3,100 annually in the coming years. The benefits will take many forms: Americans will have access to cheaper cars, and patients will save nearly 10 percent on prescription drugs.

The White House says these rollbacks on everyday items will help blue-collar and middle-class Americans significantly more than the richest citizens of our country.

"Overregulation falls disproportionately on the shoulders of lower-income families, who spend a larger share of their incomes on heavily regulated goods and services," a statement from The White House says. "Those purchases include transportation, food, and healthcare. Such government burdens also cost American jobs by causing workers to be replaced with lower-cost machines."

Under President Trump, $50 billion in regulatory costs has already been saved. By current projections, the CEA estimates that cutting red tape will lead real incomes for Americans to rise by $53 billion per year between 2021 and 2029.

The new rule modernizes NEPA in a number of ways. It:

A complete list of the changes can be found at this White House fact sheet. Read the published final rule.

The rule takes effect Sept. 14, but ARTBA expects challenges in both the federal courts and Congress.