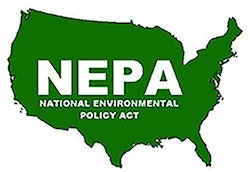 The U.S. Chamber of Commerce, along with eight other associations, has taken steps to intervene in litigation seeking to roll back recently enacted reforms to the National Environmental Policy Act (NEPA).

Earlier this summer, the White House Council on Environmental Quality (CEQ) finalized updates to NEPA designed to reduce delays associated with the permitting process while maintaining thorough reviews and public input. On average, it takes over 4.5 years for a project to reach a NEPA decision, with transportation project applications ballooning to 7 years. The Chamber formed the Unlock American Investment coalition, which had representation from virtually every sector of the American economy, to support NEPA reform efforts.

“As we confront the dual threats of an economic crisis and climate change, it is more important than ever that reforms to NEPA are implemented,” said Ed Mortimer, vice president of transportation and infrastructure at the U.S. Chamber. “It will simply be impossible to build the infrastructure our nation needs — from telecommunications to roads and bridges to renewable energy — without the reforms the Administration has enacted. That’s why the Chamber and our partners are fully committed to defend this important rule.

“The government followed an extensive, three-year process in which almost 500,000 supportive comments were received. While it is unfortunate that opponents to the rule are seeking to delay the permitting process for some of the very projects that would help improve the environment, we believe that the changes made were both consistent with the law and appropriate, and we’re hopeful that the Court will grant our motion to allow us to participate in this case.”

The case in question is Wild Virginia vs. Council on Environmental Quality. The Chamber and its partners are also planning to request intervention in other challenges to the new NEPA regulations.

A look at trends in construction employment prior to the pandemic and how things have changed, the latest employment data and what the future may hold.
July 14, 2020
Latest

"Dig once" rule is intended to reduce inefficiencies during highway construction and increase access to broadband capabilities in rural communities.
U.S. Department of Transportation
August 14, 2020

The Great American Outdoors Act is a historic, bipartisan law that marks the largest-ever investment into America’s national parks and public lands. It will also create more than 100,000 infrastructure-related jobs.
Jessica Lombardo
August 5, 2020

Roads of the future will be used to generate energy, improve logistics and capture and communicate data for predictive analytics.
Volvo Construction Equipment
August 5, 2020

The justices declined to lift a stay that allows the federal government to continue construction while legal challenges continue.
August 3, 2020