Government spending on transportation and other public works was 1.4% of the nation's economic output in Q2 2017 - the lowest level on record 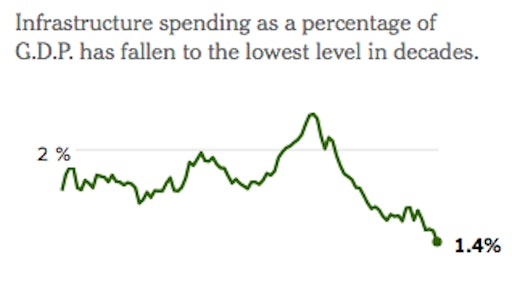 Infrastructure spending has been continuing to decline with such spending only accounting for 1.4% of the nation's economic output in Q2 2017.
New York Times

According to an article in the New York Times, spending on government construction projects was lower in 2016 than in 2007 in 34 states. Public construction spending in June 2017 was 9.5% lower compared to June 2016.

On a positive note, thanks to stornger activity in the private sector total construction spending has climbed above the prerecession peak.

(more on the continuing decline in federal infrastructure funding...)