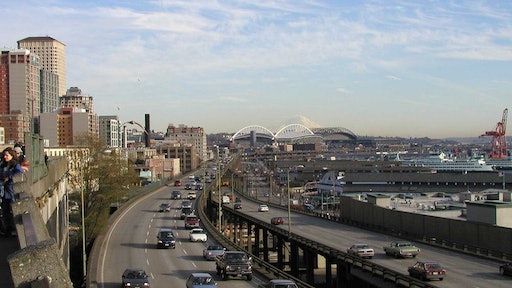 Demolition plans for the old Alaskan Way Viaduct in Seattle are just getting started.
WSDOT

While crews work to build the double-decker roadway inside the new State Route 99 tunnel in Seattle plans to remove the old Alaskan Way Viaduct are underway. Demolition of the old viaduct is scheduled to begin in early 2019 and take up to nine months. The demolition contract will also involve other project elements such as filling in the Battery Street Tunnel and reconnecting surface streets.

Washington State Department of Transportation (WSDOT) plans to send out a request for qualifications for contractors and develop a request for proposals this summer. Late in 2017, WSDOT expects to issue a RFP to the most qualified contractors, with proposals due in early 2018 and the contract awarded to the best-value contractor shortly thereafter.

Demolition will require shifting Alaskan Way west from beneath the viaduct, removing the viaduct from South Dearborn Street to the Battery Street Tunnel, removing the Columbia Street and Seneca Street ramp structures, removing a majority of the viaduct’s 397 foundations and footings to 5 feet below ground, decommissioning the Battery Street Tunnel and restoring Aurora Avenue North between Harrison Street and Denny Way, and restoring roadways, sidewalks, street lighting and other elements to a temporary condition until the city of Seattle builds the new waterfront.

(more on the demolition of the old Alaskan Way Viaduct...)