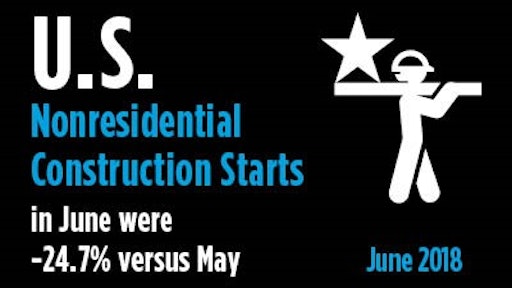 ConstructConnect announced that June’s volume of construction starts, excluding residential activity, was $39.8 billion – a month-to-month change of -24.7%. The one-quarter drop was not due to market conditions. Rather, the comparison of June vs. May suffered from the latter including Foxconn Technology’s $10 billion industrial plant in Wisconsin. June relative to May exclusive of that single mega project was still down by -7.2%. The historical May-to-June change, aided by favorable ‘seasonality’, has been +4.5%.

The starts figures throughout this report are not seasonally adjusted (NSA), nor are they altered for inflation. They are expressed in what are termed ‘current’ as opposed to ‘constant’ dollars.

Nonresidential building plus engineering/civil work accounts for a larger share of total construction than residential activity. The former’s combined proportion of total put-in-place construction in the Census Bureau’s April report was 57%; the latter’s share was 43%.

June 2018’s increase in construction employment, as recorded in the latest Employment Situation report from the Bureau of Labor Statistics (BLS), was +13,000 jobs. Among sub-sectors of construction, it was heavy and civil engineering work that saw the largest month-to-month pickup in hiring with +6,000 jobs. The average monthly climb in staffing by the construction sector through the first half of this year has been 25,000, a decent gain (+25%) over last year’s comparable figure of 20,000.

Construction jobs are now +4.1% year over year, a rate of improvement that is more than two-and-a-half times greater than the +1.6% advance for all jobs in the nation. The BLS report also includes employment results for the following additional pockets of the economy with close ties to construction: architectural and engineering services, +3.1%; building material and garden supply stores, +3.7%; real estate, +2.1%; and oil and gas extraction, +3.9%.

Most of the 24.7% retreat in total nonresidential starts month to month (m/m) in June originated in the industrial subcategory (-87.7%). There were no projects in June’s manufacturing starts that could compete with May’s $10 billion Foxconn insertion. Commercial was also down (-40.4%), but institutional (+18.0%) and engineering (+4.5%) perked up.

There was a similar pattern for year-to-date (ytd) total nonresidential starts. The fact that January to June 2018 total nonresidential starts were -5.5% relative to January to June 2017 resulted from weakness in commercial (-23.7%) and institutional (-12.3%) that was not quite offset by strength in industrial (+35.8%) and heavy engineering (+13.4%).

Miscellaneous commercial in June, however, did manage to deliver some good news. While -42.6% ytd, it was +23.8% y/y and +92.7% m/m. This category includes transportation terminal work, which was +60.9% ytd. The passenger side of airport construction appears here, with runways in the civil category. Nashville has been the latest city with large airport terminal work.

Medical facility work has a large supporting role in institutional starts. Hospital/clinic, nursing/assisted living and miscellaneous medical combined for a 28% share of institutional in June. The biggest of those three, hospital/clinic, was -4.1% m/m; -8.5% y/y; and -22.2% ytd.

The 12-month moving average trend graphs are showing declining slopes for the building type of structure categories, but ascending curves for the civil categories.

Because it is comprised of total-value estimates for individual projects, some of which are ultra-large, ConstructConnect’s nonresidential construction starts series has a history of being more volatile than many other leading indicators for the economy.