Construction Costs Expected to Continue Rising Through Next Six Months 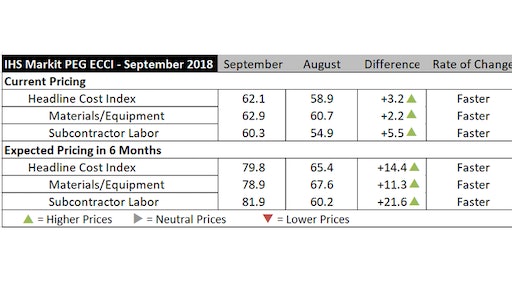 Price increases for materials and equipment were stronger in nine of the 12 subcomponents in September: the index posted a gain of 2.2 points, rising to 62.9. The indexes were lower in two of the 12 categories compared to last month; 11 out of 12 categories remained above the neutral threshold of 50. The biggest gain was in electrical equipment. The biggest loss was in the index for copper-based wire and cable, for which the index dropped below 50 after almost two years of recording increasing prices.

“Copper is being pummeled by the broadening trade war between the U.S. and China and the threat of weaker Chinese growth,” said John Mothersole, director – pricing and purchasing, IHS Markit. “Inventory, however, has been falling since April and regional warehouse premiums have been rising globally, both signs that fundamentally, the market is tightening. The potential clash between fundamentals and sentiment could make the fourth quarter particularly interesting.”

Current subcontractor labor prices increased at a faster pace this month, with the index rising 5.5 points to 60.3, marking the 14th straight month of increasing prices. Labor costs continued to increase in all regions of Canada and the U.S. The majority of survey respondents signaled current subcontractor labor pricing was unchanged from August, though more respondents experienced higher prices.

In the survey comments, respondents indicated a tight labor market for all skilled trade workers. They also noted activity ramping up in mining and infrastructure.

To learn more about the IHS Markit PEG Engineering and Construction Cost Index or to obtain the latest published insight, please click here. 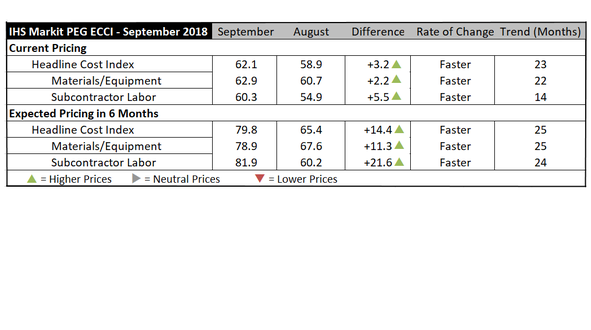