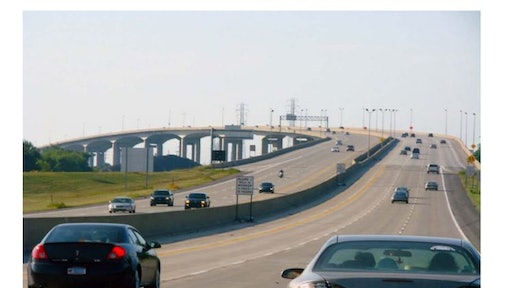 While increased transportation funding provided by Michigan’s 2015 road funding package has allowed many projects to proceed throughout the state, additional investment is needed to complete numerous projects that would improve Michigan’s road and bridge conditions, relieve traffic congestion, and enhance traffic safety and efficiency. This is according to a new report from TRIP, a national transportation research nonprofit based in Washington, DC.

According to the TRIP report, “Modernizing Michigan’s Transportation System: Progress & Challenges in Providing Safe, Efficient and Well-Maintained Roads, Highways & Bridges,” nearly half of major roads in Michigan are in poor or mediocre condition, more than one in 10 bridges are structurally deficient, and drivers lose up to 54 hours per year in traffic congestion. Driving on deficient roads costs Michigan motorists a total of $14.1 billion in the form of additional vehicle operating costs as a result of rough roads, congestion-related delays and traffic crashes.

In late 2015, Michigan’s governor signed into law a transportation funding package that combines increased user fees, registration fees and general funds to allow the state and local governments to move forward with numerous projects to repair and improve portions of the transportation system. However, as the report indicates, "the funding is not sufficient to fully address the significant deterioration of the system, or to allow the state to provide many of the transportation improvements needed to support economic growth."

Passage of the road funding package increased state funding for local roads and bridges, state roads and bridges and transit from $2.2 billion in 2015 to nearly $3.7 billion in 2023. But while the additional funding allowed the state to move forward with numerous projects that otherwise may have remained unfunded, many projects across the state will not move forward without additional transportation funding. The TRIP report includes a list of projects across the state that are either underway or will be underway or completed no later than 2023, and a list of projects that currently lack adequate funding to proceed.

Statewide, 24% of major roads are in poor condition and 20% are in mediocre condition. “The TRIP data confirms what we’ve been saying for some time: Michigan’s roads and bridges are crumbling because of decades of under investment,” said Michigan Department of Transportation Chief Operating Officer and Chief Engineer Tony Kratofil. “Ensuring safe and efficient travel is our top priority, and these findings demonstrate the challenges we face fulfilling our mission.”

Statewide, 11%  (1,175 of 11,180) of bridges are structurally deficient, meaning there is significant deterioration to the major components of the bridge. Forty-three percent of Michigan’s bridges (4,815 of 11,180) were built in 1969 or earlier. Bridges 50 years or older often require significant rehabilitation or replacement.

Michigan drivers are dealing with increasingly congested roadways, as population and vehicle-travel rates return to pre-recession levels. Drivers lose as many as 54 hours each year as a result of traffic congestion. Lost time and wasted fuel as a result of congestion cost Michigan drivers a total of $5.6 billion annually. Driving on rough roads also costs Michigan motorists $4.6 billion annually in the form of accelerated vehicle depreciation, additional repair costs and increased fuel consumption and tire wear. 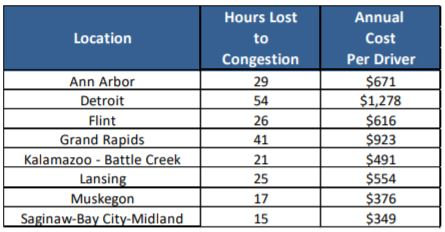 The number of hours lost to congestion annually for the average driver in Michigan’s largest urban areas. Also includes the cost of congestion per motorist, in the form of lost time and wasted fuel. Source: TRIP Report

Improving safety features on Michigan’s roads and highways would likely result in a decrease in the number of traffic fatalities and serious crashes. A total of 4,905 people were killed in Michigan in traffic crashes from 2013 to 2017, an average of 981 fatalities per year. Traffic crashes in which roadway design was likely a contributing factor cost Michigan drivers $3.9 billion annually in the form of lost household and workplace productivity, insurance and other financial costs.

The efficiency and condition of Michigan’s transportation system, particularly its highways, is critical to the health of the state’s economy. Annually, $1 trillion in goods are shipped to, from and within sites in Michigan, relying heavily on the state’s network of roads and bridges. Increasingly, companies are looking at the quality of a region’s transportation system when deciding where to re-locate or expand. Regions with congested or poorly maintained roads may see businesses relocate to areas with a smoother, more efficient and more modern transportation system.

“While the recent influx of funding has allowed Michigan to make strides in improving its transportation system, more work still needs to be done to provide the state’s residents, businesses and visitors with a smooth, safe and efficient transportation system,” said Will Wilkins, TRIP’s executive director. “Michigan will need to continue to make transportation investment a top priority.”