The increase follows a 12% decline in April, and shows total construction activity reaching the highest level reported over the past eight months 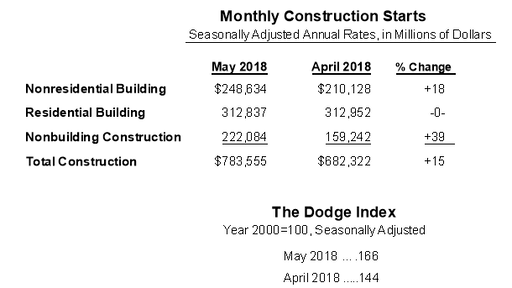 At a seasonally adjusted annual rate of $783.6 billion, new construction starts in May advanced 15% from April, according to Dodge Data & Analytics. The increase follows a 12% decline in April, and shows total construction activity reaching the highest level reported over the past eight months. The lift in May came from substantial gains for nonbuilding construction, up 39%; and nonresidential building, up 18%, as both sectors benefitted from the start of several very large projects.

Nonbuilding construction, and specifically its public works segment, was boosted by the start of three large natural gas pipelines with a combined construction start cost of $4.6 billion, plus $1.4 billion related to the start of an environmental cleanup project at the Los Alamos National Laboratory in New Mexico, a $1.4 billion rail transit project in Los Angeles CA, and a $1.1 billion rail transit project in the Boston MA area. Nonresidential building was aided by the start of a $1.0 billion Facebook data center in Nebraska, the $764 million expansion to the Washington State Convention Center in Seattle WA, and a $740 million airport terminal project at Salt Lake City International Airport. Meanwhile, residential building in May held steady with its April pace.

The May statistics raised the Dodge Index to 166 (2000=100), compared to April’s reading of 144 (upwardly revised from the initially reported 143). “During the first five months of 2018, total construction starts have shown an up-and-down pattern, with May coming in strong after a subdued April,” stated Robert A. Murray, chief economist for Dodge Data & Analytics. “Much of the volatility in early 2018 has come from the public works sector, affected by the presence of unusually large project starts during a given month such as what took place in May.  In addition, the nonresidential building sector showed resilience in May, bouncing back after a lackluster performance in April.” 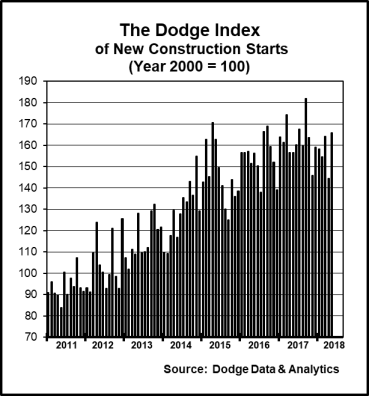 “On balance, the pace of total construction starts is staying close to the levels achieved over the past year, when activity grew 5%,” Murray continued. “It’s true that the construction industry is facing increased headwinds, such as higher material prices and the recent pickup in interest rates, but to this point they have not yet produced a discernible negative impact on the overall level of construction starts. On the plus side, the public works and institutional building sectors continue to benefit from the state and local bond measures passed in recent years. The public works sector should also benefit from the increased federal funding for transportation projects included in the March 2018 federal appropriations bill.

"While market fundamentals such as rents and vacancies have weakened for multifamily housing, they still remain relatively healthy for warehouses and offices," he continued. "Bank lending standards for nonresidential building projects have eased slightly, and the recent rollback of Dodd-Frank regulatory constraints on mid-size regional banks may lead to more funding for construction projects in the near term.”

Nonbuilding construction in May was $222.1 billion (annual rate), rebounding 39% after sliding 23% in April. The public works project types as a group surged 47%, boosted by a 169% jump by the miscellaneous public works category that includes pipelines, rail transit, and site work.

There were three substantial natural gas pipeline projects entered as construction starts in May – the $2.1 billion Mountaineer Xpress Pipeline in West Virginia, the $1.9 billion Gulf Coast Express Pipeline in Texas, and the $600 million Gulf Xpress Project that involves new compressor stations in Kentucky, Tennessee, and Mississippi. During the first five months of 2018, the dollar amount of pipeline projects entered as construction starts was $12.0 billion, only slightly below the exceptional $14.5 billion reported during last year’s first five months.

In addition, there were two substantial rail transit projects entered as construction starts in May – the $1.4 billion Westside Purple Line Extension (section 2) in Los Angeles CA and the $1.1 billion Green Line Extension in Somerville MA. During the first five months of 2018, the dollar amount of rail transit projects entered as construction starts was $5.0 billion, more than three times the $1.6 billion reported during last year’s first five months.

The sewer and hazardous waste category soared 196% in May, reflecting $1.4 billion related to the start of environmental cleanup work at the Los Alamos National Laboratory in New Mexico that will span up to ten years. Water supply construction and river/harbor development registered similar gains in May, rising 25% and 22% respectively, with the latter helped by the start of a $310 million flood mitigation project in Brooklyn NY.

Highway and bridge construction was the one public works project type to recede in May, dropping 26% as it continues to retreat after very strong activity in March. Through the first five months of 2018, highway and bridge construction starts were still up 4% compared to last year.  The electric utility/gas plant category dropped 24% in May, although the latest month did include the start of a $325 million wind farm in Illinois and a $250 million transmission line project in Missouri.

Nonresidential building in May was $248.6 billion (annual rate), climbing 18% after a 12% decline in April. The institutional categories as a group increased 40%, reaching the highest level since last September. Amusement and recreational building provided much of the lift, advancing 138% in May with the help of these large projects – the $764 million expansion to the Washington State Convention Center in Seattle WA, the $175 million Wynn Paradise Park Convention Center (phase 1) in Las Vegas NV, and the $168 million  Harrah’s Northern California Casino in Ione CA.

The transportation terminal category also advanced sharply in May, rising 132% as the result of groundbreaking for the $740 million North Concourse terminal at Salt Lake City International Airport in Utah.

Educational facilities, the largest nonresidential building category by dollar amount, grew 29% in May after slipping 11% in April. Large educational facility projects that reached groundbreaking in May included the $400 million Lucas Museum of Narrative Art in Los Angeles CA, a $186 million high school in Sherwood OR, and a $185 million renovation of an office building into a K-12 private school facility in Washington DC.

The commercial categories as a group rose 7% in May, showing improvement for the second month in a row after April’s 6% gain. Hotel construction had a strong May, climbing 27% as the result of such projects as the $320 million Four Seasons Hotel in New Orleans LA and the $222 million Kalahari Resort in Round Rock TX. Warehouse construction advanced 21% in May, reflecting the start of a $200 million warehouse complex in Edgerton KS and an $83 million tire distribution center in the Memphis TN area. New office construction starts increased 7% in May, lifted by a $1.0 billion expansion to a Facebook data center in Papillion NE and a $300 million office building in Charlotte NC.

Also contributing to May’s commercial building upturn was the commercial garage category, which grew 19%. However, store construction retreated from its improved April amount, falling 33% in May.  The manufacturing building category in May plunged 54%, showing weaker activity for the second month in a row.

Residential building in May was $312.8 billion (annual rate), essentially unchanged from its April amount. Multifamily housing in May made a partial 13% rebound after a 20% decline in April.

Single family housing in May retreated 4% from the previous month, as the continued expansion for this project type struggles to take hold in early 2018.  By geography, single family housing showed this pattern in May relative to April – the South Central, down 8%; the West and South Atlantic, each down 6%; and the Midwest and Northeast, each up 5%.

By major region, total construction starts during the first five months of 2018 performed as follows – the Northeast, down 12%; the Midwest, down 8%; the West, down 4%; the South Central, down 1%; and the South Atlantic, up 4%.

Dodge Data & AnalyticsUseful perspective comes from looking at 12-month moving totals, in this case the 12months ending May 2018 versus the 12 months ending May 2017.  On this basis, total construction starts were up 1%. By major sector, nonresidential building fell 4%, with commercial building down 9%, institutional building down 3%, and manufacturing building up 15%. Nonbuilding construction advanced 8%, with public works up 11% while electric utilities/gas plants dropped 7%. Residential building increased 3%, with single family housing up 7% while multifamily housing fell 6%.

US Commercial Construction Contractors Optimistic for 2018 Despite Challenges