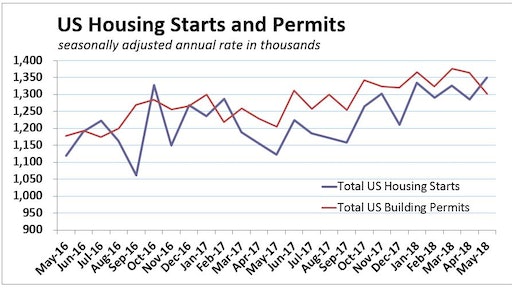 Total U.S. housing starts in May continued to set new highs for this economic cycle with a 5.0% leap to a 1.35 million-unit seasonally adjusted annual pace. Single-family starts (+3.9%) and multifamily starts (+7.5%) rose in May. Permits fell, however, dropping 4.6% to a 1.30 million-unit pace for the month.

The month’s increase in housing starts was driven by a staggering 62.2% surge in starts in the Midwest. By contrast, starts plunged 15% in the Northeast and declined 4.1% and 0.9% in the West and South, respectively.

The pace of homebuilding in the Midwest rose by 102,000 units in May, split fairly evenly between single-family and multifamily starts. The Midwest’s overall gain more than accounts for the nation’s 64,000-unit increase in housing starts.

“We suspect spring showed up a little later than usual in the Midwest this year, which allowed builders to ramp up construction a little more than they usually do in May,” says Mark Vitner, senior economist with the Wells Fargo Economics Group.

Year-to-date, starts in the Midwest 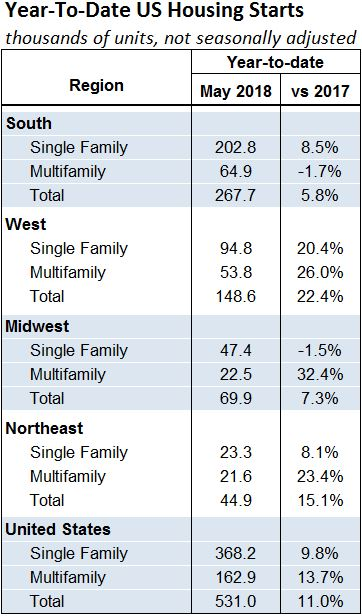 “One last point to keep in mind about the Midwest is that economic growth has improved dramatically during the past year, with manufacturing bouncing back and unemployment falling to new lows,” says Vitner. “The improvement in the non-seasonally adjusted data is real and likely to ramp up even further in coming months.”

Weather may have dampened starts in the South, which saw a fair amount of rain in May. The South typically accounts for a little over half of housing starts and an even larger proportion of single-family starts. Demand for homes in Texas, Florida, Georgia and the Carolinas remains exceptionally strong but is bumping up against supply constraints, as builders scramble to secure lots and workers.

Rising prices for lumber and other building materials are also causing many smaller homebuilders to delay projects until later this year, when lumber prices should ease somewhat.

Starts fell 4.1% in the West, marking their second consecutive drop. Most of May’s slowdown was in multifamily starts, while single-family construction was little changed. Soaring home prices have softened attitudes toward residential development out West, leading to stronger gains in California, Arizona, Colorado and Nevada. Starts had surged earlier this year, however, and saw less of a pick up this spring than they typically do, resulting in a seasonally adjusted decline. On a year-to-date basis, housing starts are running 22.4% ahead of their year-ago pace.

Year-to-date U.S. starts are 11.0% above the same period of 2017, and despite multifamily declines in the South and slowing single-family building in the Midwest, builders nationwide have started 9.8% more single-family and 13.7% more multifamily construction since the first of the year. 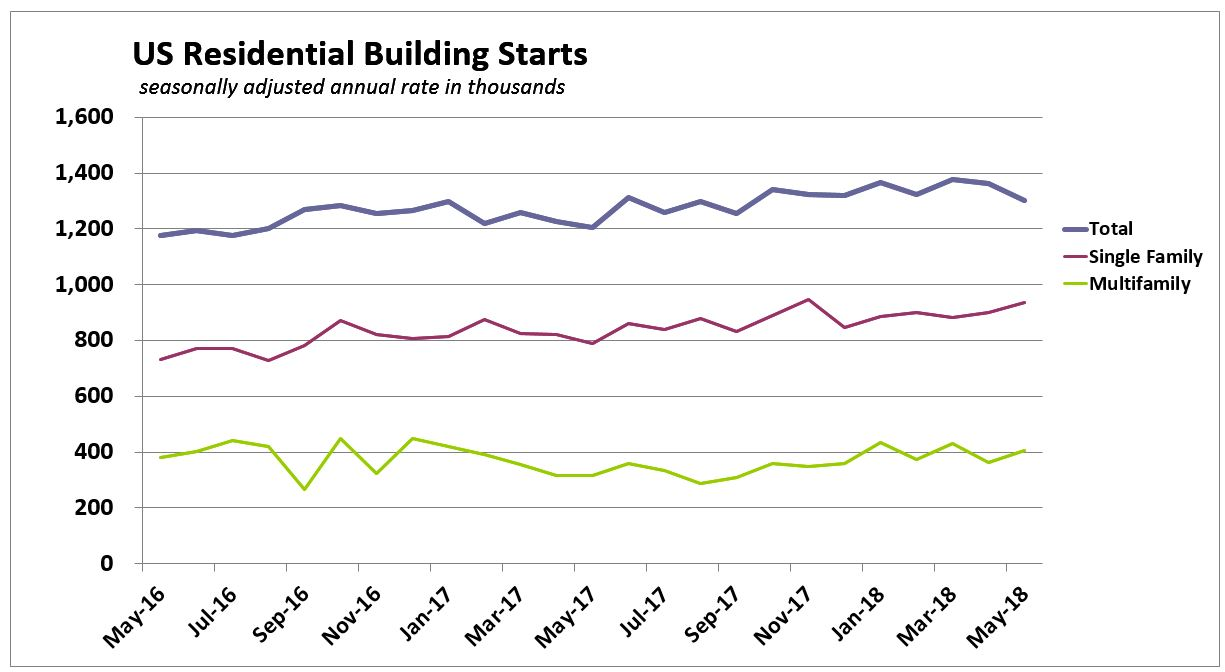 [VIDEO] May US Housing Starts Beat Forecasts and Cycle Record

Construction Employment Rises in All But 8 States