Index fell 4.4% on lower institutional and commercial construction spending for the month 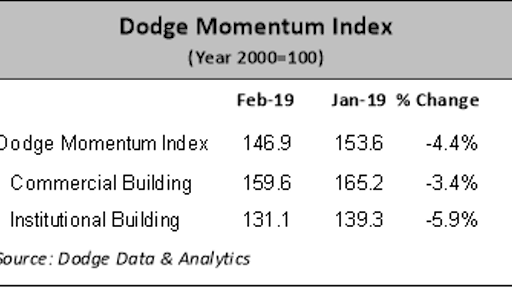 The Dodge Momentum Index lost 4.4% in February, falling to 146.9 (2000=100) from the revised January reading of 153.6. The Momentum Index, issued by Dodge Data & Analytics, is a monthly measure of the first (or initial) report for nonresidential building projects in planning, which have been shown to lead construction spending for nonresidential buildings by a full year. Both components of the Momentum Index lost steam in February – the institutional component moved 5.9% lower, while the commercial component dropped 3.4%.

Since November, the Momentum Index has re-established a sawtooth pattern that’s often been present in recent years. It’s also become clear that the average level of activity has downshifted slightly since the summer of 2018. From April through August last year, the average level of the Momentum Index was 158.6, while from September through the latest month the average is 150.3 – a decline of 5.2%. This shift continues to suggest that the growth in construction activity will moderate over the coming year.

“For 2019, the economic environment may not be quite as supportive to commercial and multifamily construction starts as what took place during 2018,” Robert A. Murray, chief economist for Dodge Data & Analytics noted last month following release of a report on full-year commercial and multifamily construction starts in 2018. “The benefits of tax reform on economic growth are expected to wane, which may also dampen occupancies and rent growth, particularly as the supply of commercial and multifamily space rises with the completion of projects that reached groundbreaking in recent years. Furthermore, the most recent survey of bank lending officers conducted by the Federal Reserve suggests that a more cautious lending stance emerged during the latter half of 2018, especially with regard to loans for multifamily projects.”

In February, nine projects each with a value of $100 million or more entered planning. The leading commercial building projects were the $200 million Keurig/Dr. Pepper office project in Frisco TX and a $200 million mixed-use development in San Jose CA. The leading institutional building projects were the $300 million VCU Health Children’s Hospital in Richmond VA and the $187 million Wolfson Children’s Critical Care Tower in Jacksonville FL.