Construction added just 4,000 jobs in May, while the US economy's new jobs created fell to a three-month average of 151,000

CPWR -- The Center for Construction Research and Training 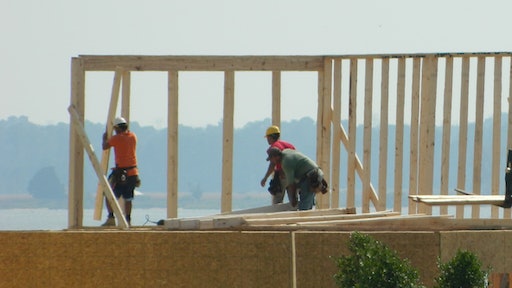 Slow May job growth is discouraging, but most disconcerting is evidence that wage growth is also slowing in spite of the 3.6% unemployment rate. 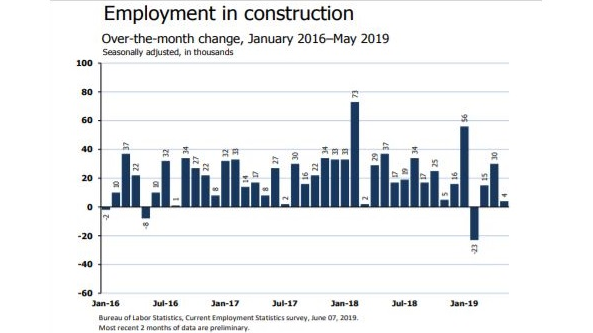 Construction added 4,000 jobs in May, and manufacturing added 3,000. This compares to average monthly growth over the last year of 17,900 and 15,300, respectively.US Burea of Labor Statisticsthat the economy added just 75,000 jobs in May [economists surveyed by Dow Jones had expected a gain of 180,000]. In addition, the prior two months growth numbers were revised down by 75,000, leaving the three-month average at 151,000.

While the slower job growth reported for May is discouraging, probably the most disconcerting aspect of the report is the evidence that wage growth is actually slowing in spite of the 3.6% unemployment rate. The year-over-year rate of increase in the average hourly wage was 3.1%, down from a peak of 3.4% earlier this year. The annualized rate of wage growth when comparing the last three months (March, April, and May) with the prior three months (December, January, and February) was just 2.7%.

The slower job growth hit pretty much every sector in May. Construction added just 4,000 jobs in May, while manufacturing added 3,000. This compares to an average monthly growth over the last year of 17,900 and 15,300, respectively. Manufacturing has been looking especially weak in recent months, as average hours have been dropping. The index of aggregate hours worked in manufacturing is at the same level as it was last August. Wage growth has also been weak in manufacturing, with the average hourly wage up just 2.2% over the last year.

While most of the data in the establishment survey was negative, the household survey was more mixed. There was a drop of almost 300,000 in the number of people involuntarily working part-time. This pushed down the broader U-6 measure of unemployment by 0.2 percentage points to 7.1%, the lowest level of the recovery to date. The share of unemployment attributable to voluntary quits jumped to 13.5%, the third highest level of the recovery, although a share that is still below the peak of over 15.0% reached in 2000.Retail lost 7,600 jobs, with a loss of 12,700 jobs in clothing stores being the main factor. Employment is now down by 75,700 (0.5%) over the last year. Health care added just 15,700 jobs in May, the slowest growth since September of 2017. That compares to an average of 32,500 over the last year. Restaurants added 16,900 jobs in May, down from an average of 25,100 over the last year. State and local education lost 14,400 jobs, although this could be a seasonal adjustment issue.

This report provides grounds for concern about a weakening recovery. While there is little reason to believe that the economy is about to fall into a recession, the weaker job growth, coupled with the slowing of wage growth, indicate that the labor market is not nearly as tight as the 3.6% unemployment rate would indicate.