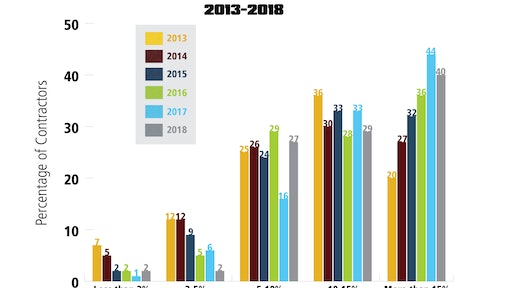 Last year Pavement Maintenance & Reconstruction’s Top Contractor Survey experienced a 25% decline in the number of contractors participating – but this year participation jumped 30% to the highest number of companies since the survey was begun in 2013.

That increase enabled Pavement to expand each list to 75 companies where they’ve been all years but one (last year when we listed only 50 companies in each list. We’re still shooting for 100 companies, but that’s entirely up to contractors.

We’re still hoping to develop a Sweeping 75 list, but participation from that segment of the industry is woefully inadequate. So once again we are not able to provide a Sweeping Top Contractor list.

Let’s start by looking at overall sales dollars of the participating contractors, which took an expected leap as each of the lists expanded to 75 contractors. Total sales all qualifying contractors reached more than $1.214 billion. That’s a decline from $1.717 billion in 2015 but an increase from $1.188 billion in 2016 -- the last two years the list contained 75 companies. (Last year total sales topped $910 million when lists were cut to 50 companies.)

That overall sales number represents the combined total of only paving-only, sealcoating-only, striping-only, and repair-only sales – in other words the sales figures used to compile our four lists. No sales dollars are duplicated and any sales relegated to the “Other” sales category also are not included.

As the chart shows, there continues to be a broad range of profit margins with which contractors are working. This holds true for each of the industry segments as well. But what is clear is that at the very least, margins are moving up -- as indicated by the drop in contractors who are working on margins of less than 5%.

Last year we reported the good news that margins continued their shift to the higher end, particularly in the “More than 15%” category. This year the number of contractors reporting margins in that range declined to 40% after a steady improvement each year. The “10-15%” category also shows a slip from 33% to 29% of contractors.

But the biggest change is in the “5-10%” category, which jumped from 16% to 27%, indicating that there might be a bit more price competition than in recent years - not a huge surprise given that the backlog of work caused by the Great Recession is now eliminated and the workload is close to back to normal. The “Less than 3%” and “3-5%” categories continue their positive downward trend, this year showing that only 4% contractor report profits of less than 5% wages.

As mentioned above, the pent-up demand that resulted from the Great Recession has dissipated. That work was reflected in the 2014, 2015 and to some extent 2016  survey results when both sales volume and profit margins were greater – there was plenty of work and contractors reaped the benefits.

Starting last year and continuing this year it seems the industry has settled to what might be considered a more normal level with work being let on a regular schedule and contractors having to compete for it – a plausible explanation for the slight shift in profit margins away from the top end and toward the middle range.

Last year 77% of contractors reported margins greater than 10%; that number has declined to 69% this year with the shift toward the 5-10% profit margin. And while that could be a result of the pent-up demand dissipating, it could also reflect the fact that by expanding the list we have included smaller contractors who might be working on slimmer margins.

Number of Jobs. Contractors generally have to juggle their schedule, as indicated by their responses to a question of how many jobs they complete each year. Just over two-thirds (68%) complete more than 200 jobs, with 42% completing more than 400 jobs. Almost one-third (32%) perform fewer than 150 jobs.

Number of Customers. But the number of customers contractor perform those job for indicates they often obtain multiple projects from the same customer. A little over half (55%) work for fewer than 200 customers, while 28% work for more than 400 customers

Replacement Value of Equipment. While the pavement maintenance business has been viewed as an industry with a low-cost barrier to entry, the contractors that make up these lists have formidable fleets. While almost one-quarter (24%) could replace their fleet for less than $500,000, it would cost more than $1 million for 63% of contractors – 42% of whom would have to spend more than $2 million.

Is there a Most-Profitable Service?

The last few years we’ve looked at the Top Contractor survey results to try to determine if there is a “most profitable” pavement maintenance service?” Past results indicate there is not, and this year’s results reinforce that. The four categories are very similar in their margin breakdowns with the following reporting margins of 10% or more (percentages in parentheses are 2016 figures when lists last contained 75 companies each):

Why Are There No Sweeping "Top Contractors"?