North of Sacramento, a W 210i and W 2100 precisely milled the spillway chute of the Oroville Dam, the highest dam in the US. 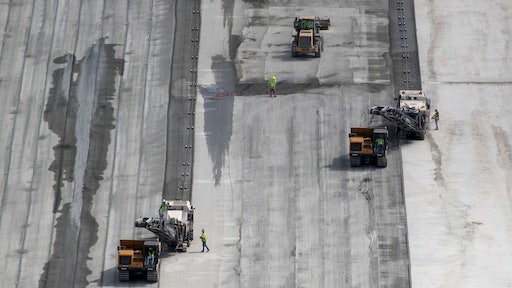 At an altitude of 771 ft., the earthfill embankment dam on Lake Oroville dams the waters of the Feather River. After several weeks of rainfall, the dam reached its maximum water level of around 4.3 billion cubic meters in the winter after only 50 days. As a result, the owner, the California Department of Water Resources, had to initiate flood control measures at an early stage.

The water was discharged in a controlled manner over the top of the dam structure at the level of the dam crown and the adjacent spillway. Due to the large quantities of water and the extremely high water pressure, however, the 180-ft.-wide, main concrete spillway eroded to such an extent that rehabilitation was unavoidable. 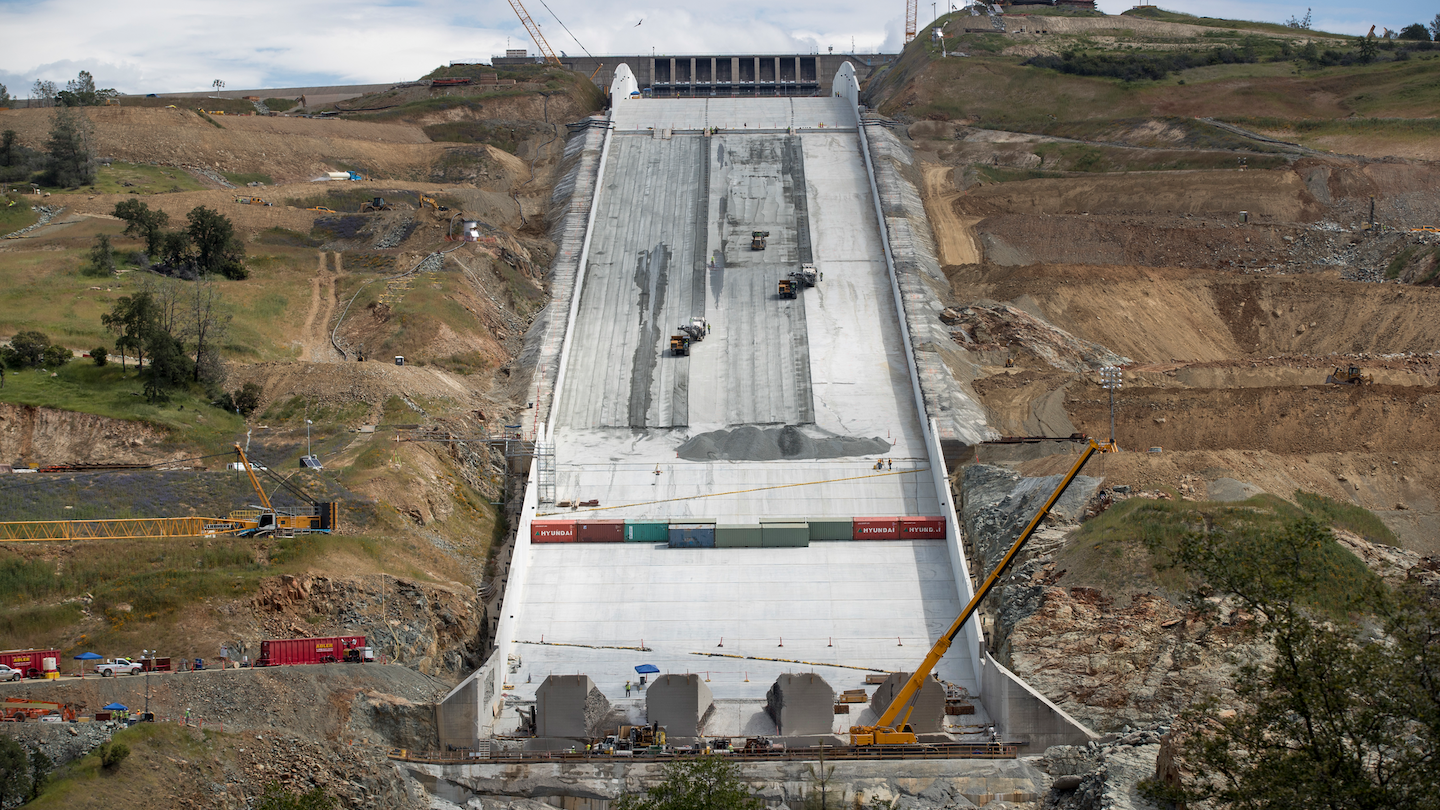 Safety played an important role during the rehabilitation project. In order to protect the workers and their equipment, cargo containers secured the lower end of the spillway.Wirtgen GroupThe damage was initially minimized provisionally by filling the erosion in the surface with rolled concrete, “so that the owner could open the overflow system during the winter months, if necessary,” explains Chris Anderson, project manager at the subcontractor, milling service provider Anrak. This temporary material had to be removed prior to final concrete paving with Portland cement, however, in order to achieve the desired surface quality. To complete this task, the contractor decided to use two cold milling machines from Wirtgen.

Eight days had been scheduled for the removal of the first layer of rolled concrete. The lower section of the spillway was about 984 ft. long. The milling depth required was approximately 2 inches. This job was performed by the W 2100 equipped with an ECO Cutter milling drum. This milling drum is fitted with up to 50% fewer picks at larger tool spacings (LA) than a standard milling drum. Fewer picks means a lower cutting resistance, making it possible to mill hard surfaces such as concrete.

This process was followed by the W 210i with a standard LA15 milling drum to give the milled surface the finer texture required to pave the new concrete layer. During the job, both machines used the Level Pro leveling system developed by Wirtgen.

According to Anrak’s CEO Tom Schmidt, this is a perfect symbiosis: “We’ve used almost every machine under the sun, but none can compete with the Wirtgen milling machine together with the Level Pro system. It is both reliable and extremely precise. The evenness of the surface is perfectly uniform and the machine always has excellent traction. The latter is important when milling rolled or Portland cement concrete. And the vibrations that are unavoidable when milling such a hard surface don’t affect the Level Pro system one bit.”

After the flat bed trucks had transported the cold milling machines to the upper end of the spillway, the machines were lifted onto the structure with the aid of lattice boom cranes and driven onto the area in need of rehabilitation via specially constructed ramps. Here they faced the next challenge — milling on a 30 degree gradient. 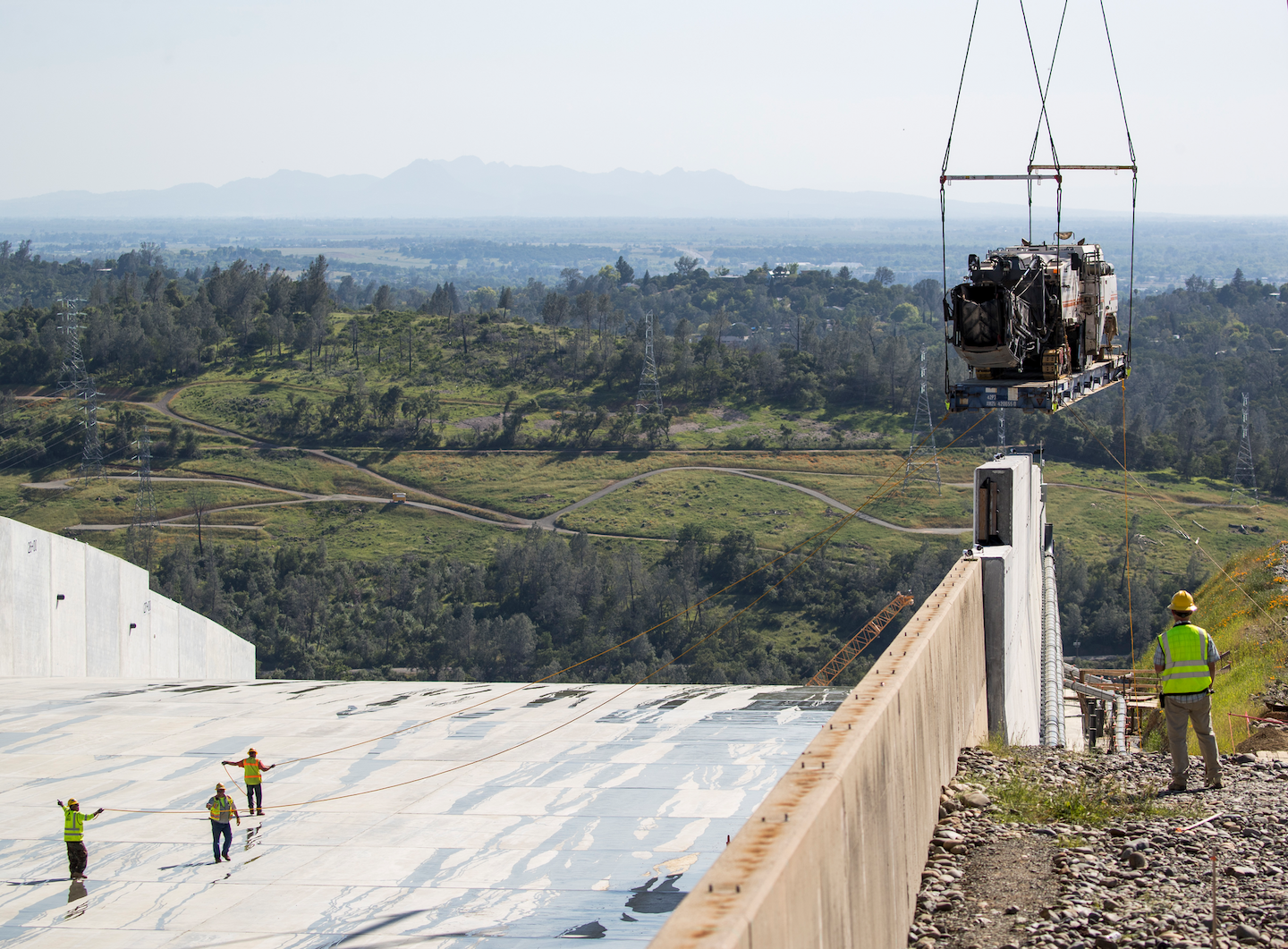 Before the cold milling machines could begin their work, they were lifted onto the surface to be milled by lattice boom cranes.Wirtgen GroupThis challenge was solved by attaching steel cables with a total length of more than 1,476 ft. to the blades of a large wheel loader and to the rear of the large milling machines, thus securing the machines while work was being carried out. In the process, the heavy steel cables were attached to several hundred trolleys that are normally used for transporting heavy furniture in order to prevent them from rubbing against the ground.

“We used the trolleys to prevent the texture of the freshly milled concrete surface from being damaged,” explains Tom Chastain, applications specialist at Wirtgen America.

The machines have a working width of 7 ft., and it took an average of two hours to remove an entire length. “In order to achieve the desired surface quality, but also for safety reasons, the cold milling machines were operated at a low advance rate of approximately 10 ft. per minute,” says Chastain.

In the end, the W 2100 and the W 210i had each milled 28 full lengths. The cold milling machines loaded the milled material directly onto tracked vehicles with a capacity of 5 cubic meters. These machines are mainly used in open-cast mining, but their excellent maneuverability also made them valuable for steep gradient milling at the Oroville Dam.

As soon as the tracked vehicles were filled, they unloaded the milled material at the lower end of the spillway so that it could be transported to a nearby concrete plant. There, the concrete milled material was reprocessed into new concrete for the subsequent construction project. 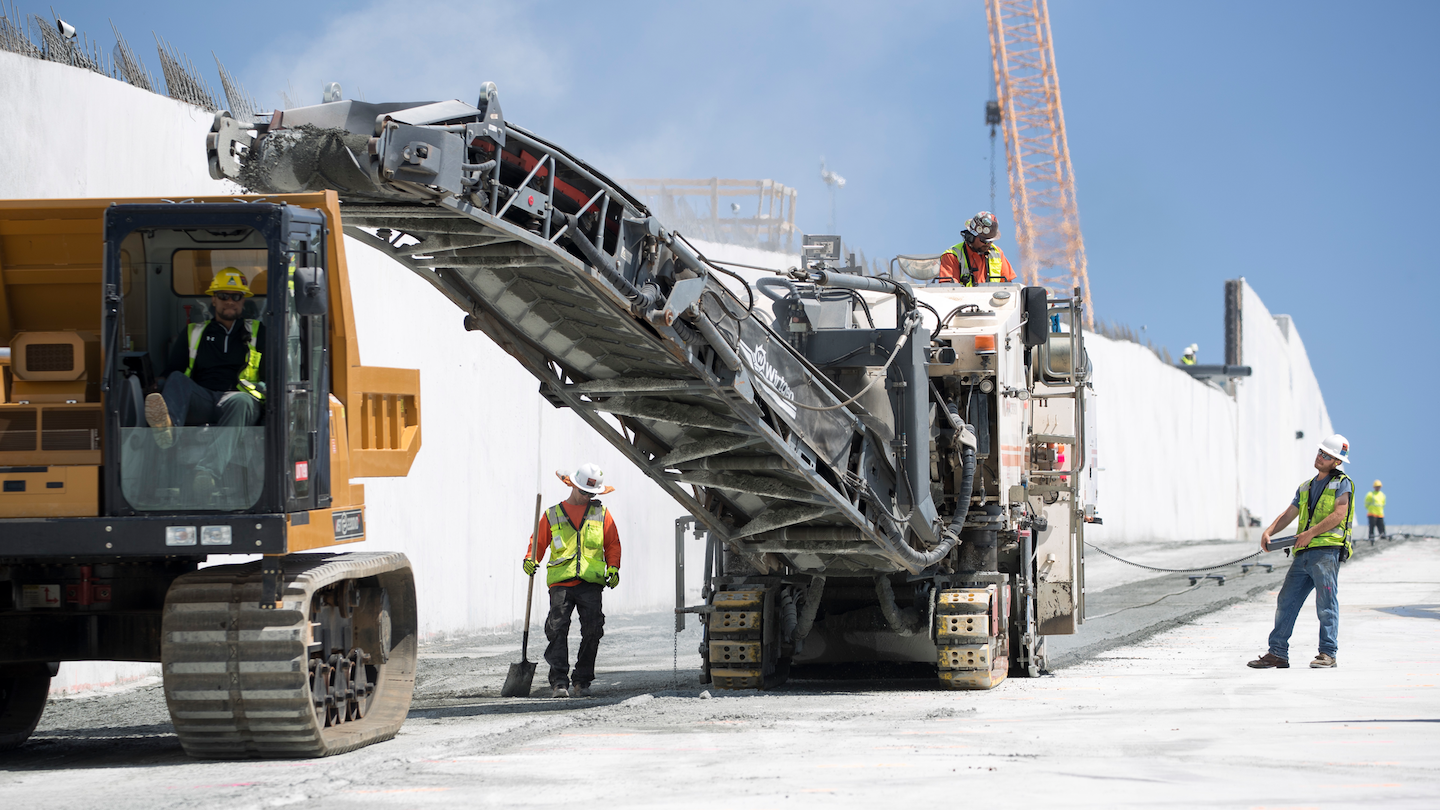 Wirtgen cold milling machines prepared the Oroville Dam’s spillway for the repair project.Wirtgen GroupAfter the “milling the spillway” subproject had been reliably completed within the scheduled time frame, the entire rehabilitation project costing $1.1 billion was completed on schedule after around two years.

A Rush Against the Clock to Protect the Oroville Dam