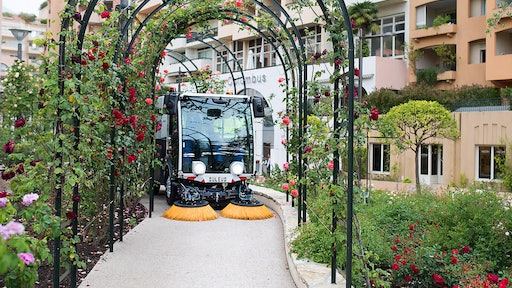 Sweeping has both an economic and environmental impact on communities and neighborhoods, but city planners and homeowner associations can struggle with how to best provide street cleaning service while holding the line on rising maintenance costs.

New technology is being developed for these machines that helps road owners accomplish their tasks faster while also extending the life of their roadways.

It's not news that street sweeping helps improve the life of a roadway. When debris piles up along the curb, it blocks the path of water meant to flow freely. When the water is blocked, it pools around the debris and seeps into the pavement. Pooling water can soak into the asphalt pavement, making it soft. Soft pavements are more prone to cracks and inevitably potholes. Once a pavement potholes, more extensive repairs are needed than just your routine maintenance which increases cost of ownership on that pavement. Regular sweeping clears the debris allowing the water to flow to freely, reducing the risk of potholes.

There are stories of cities all over the country purchasing new sweeping equipment to help preserve their roadways and the equipment is adapting to help. High efficient street sweepers, like the ones Dulevo Industrial, based in Italy, are making employ various fugitive dust loss controls to efficiently remove accumulated particulate matter and associated organic material. Not removing these fine particle materials efficiently prematurely wears pavement down. These machines not only remove a high level of accumulated material of all sizes (but especially small-micron material less than 60 microns), but also are designed to control fugitive dust losses.

Street sweeping also helps prevent materials, such as sand, salt and debris, from being washed into storm sewers that drain into local waterways. Removing the sand and salt material keeps it from being swept into the stormwater system when it rains. This helps lower the amount of bacteria, chemicals, chloride from deicing salt and other pollutants from entering local waterways.

Only one teaspoon of salt can permanently pollute five gallons of water, according to the Minnesota Pollution Control Agency. Once in the water, there is no easy way to remove chloride. Data shows chloride levels continue to increase in surface and groundwater.

Keeping water clean is another huge reason street sweepers are used and sweeper manufacturers have been working to make their machines even more environmentally friendly. Electric sweepers are popping up all over the country and the first D.Zero² by Dulevo was purchased and put to use in Pennsylvania.

Dulevo D.zero² means zero emissions of CO2, zero harmful gases and zero dust re-introduced into the environment. The electric motor also allows for a drastic reduction in noise emissions, enabling operators to work at night without disturbing the peace.

Recently, the City of Abilene purchased four Dulevo 6000 Sweeper/Road Washers with a goal of eliminating curb and gutter debris in an “innovative way that will not only clear stormwater drainage pathways, but also increase the longevity of city roadways.”

According to the City, the sweepers are equipped with the latest street sweeping technology and a customized herbicide application system. The City said the two systems let crews remove more debris and also apply herbicide to make future removal easier.

“The Dulevos are an exciting new part of Abilene’s street maintenance program because of their ability to remove and control vegetation,” the City said. “When debris like grass clippings, leaves, or dirt is not removed from curbs and gutters by property owners, it stops the flow of stormwater through the city’s drainage system. Once water is allowed to accumulate, vegetation begins to grow. That vegetation then allows stormwater to get below the street’s asphalt, penetrate the rock base of the road, and promote the breakdown of the road in the form of potholes and cracking.”

The cost of the four machine vehicles was $1.22 million. The addition of these four sweepers brings Abilene’s total number of street sweepers to six. Each street will be swept at least two to three times a year. Busier roads will be cleaned more often.