Gilbane Building Co. shares their experience reviewing 3D plans through Hololens augmented reality on the job to save time and money 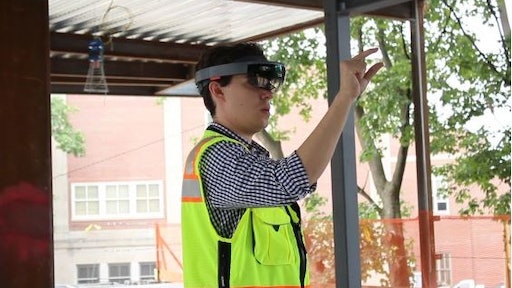 Construction is one of the least automated industries around. But augmented reality might begin to change that.

When Gilbane Building Co. Senior Manager John Myers recently inspected the mockup of a $70-million, 120,000-sq.-ft. school project through Microsoft HoloLens augmented-reality glasses, he could see that steel frames the company would order to support the building’s walls were too long for the design.

Having spotted the issue early, Gilbane can ask the supplier to cut the frames shorter in the fabrication shop rather than make the fix on site. Myers estimates that the move will save Gilbane about $5,000. The HoloLens Gilbane received in June cost $3,000.

“We’re going to want to see HoloLens improve [as a construction aid],” says Gilbane Vice President Sue Klawans. “But it’s a leap over what we were doing before. It’s not just a new toy.”