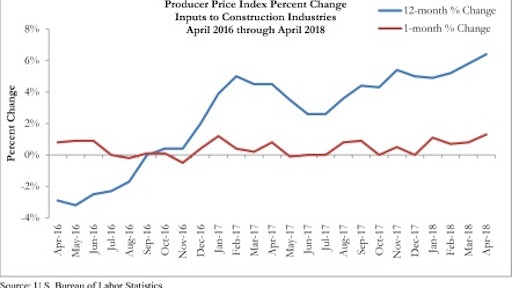 Prices for inputs to construction materials expanded 1.3% in April and are 6.4% higher than at the same time one year ago, according to an Associated Builders and Contractors (ABC) analysis of U.S. Bureau of Labor Statistics data. This represents the largest month-over-month increase in almost three years and the largest year-over-year increase since October 2011. Prices for nonresidential construction inputs increased 1.6% on a monthly basis, and are up 6.3% year over year.

“Inflation is becoming more apparent in virtually every corner of the U.S. economy,” said ABC Chief Economist Anirban Basu. “Unemployment recently dipped below 4% for the first time since 2000. As of March, there were 6.55 million unfilled job openings and 6.59 million unemployed people. This means that the ratio of unemployed to job openings is roughly one, implying that wage pressures will continue to build. Initial unemployment claims remain incredibly low while the so-called “quits” ratio is climbing, indicating that more workers feel comfortable quitting their current jobs in pursuit of better ones.

“Arguably, a number of policies are contributing to these burgeoning inflationary pressures,” said Basu. “Shifting immigration policies are one factor, as are proposed tariffs, including on steel and aluminum. During the past year, iron and steel prices are up nearly 11%. The price of softwood lumber, which has been at the center of an ongoing trade dispute with Canada, has risen by about 10%. Issues revolving around Iran help explain why oil stands at $71/barrel this morning. Recently enacted tax cuts also represent an explanatory factor; improving economic growth helps drive up prices. Beyond that are issues related to health care, home prices, apartment rents and tuition.

“Here’s the upshot: The economy and the nonresidential construction marketplace are presently strong,” said Basu. “With the finances of many states and local governments meaningfully improving, including in states as disparate as Connecticut and Utah, the expectation is that infrastructure spending is set to rise. The next two years are shaping up to be solid ones for nonresidential construction firms. However, beyond that, the outlook becomes distinctly murky.  Rising inflationary pressures are beginning to translate into higher borrowing costs. The cost of delivering construction services is also on the rise. At some point, this combination of factors will impede further progress, and may ultimately contribute to the end of the current expansion cycle.”

[VIDEO] May US Housing Starts Beat Forecasts and Cycle Record