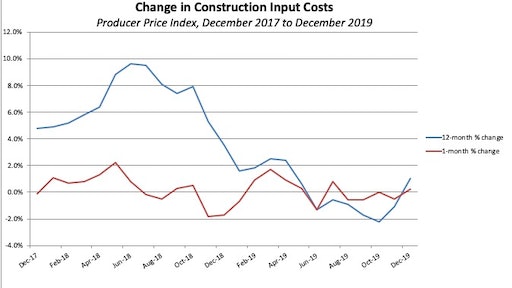 Natural gas (-49.1%) again experienced the largest year-over-year price decrease and was down nearly 5% on a monthly basis. Unprocessed energy materials prices were down 17.4% compared to the same time in 2018 but up 0.4% compared to November 2019. 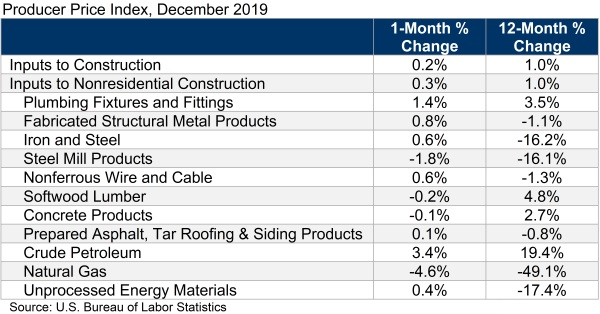 “With the global economy firming and demand for materials in the United States still elevated, contractors should expect gradual increases in materials prices going forward,” said ABC Chief Economist Anirban Basu. “ABC’s Contractor Backlog Indicator, which has hovered around nine months since August 2019, and Construction Confidence Index, which reported contractors remained confident about near-term prospects for sales and profit margins, both suggest that domestic demand will remain lofty through the first half of 2020.

“While input costs appear to be stabilizing after declining for much of the past two years, contractors face little risk of a spike in prices,” said Basu. “This is especially true with respect to energy prices, which continue to remain stable even in the context of geopolitical turbulence. U.S. energy production continues to trend higher, helping to support historically low prices, especially for natural gas.