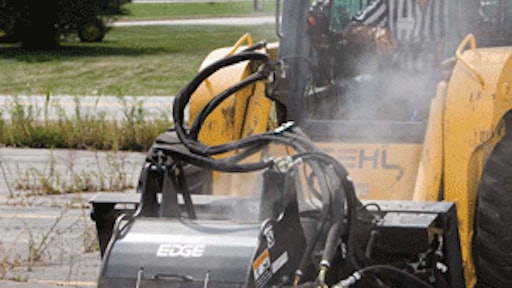 Heavy-duty attachments need to be carefully paired with the right skid steers.

With the advent of the quick-attach system on skid steers, users have a whole array of attachments open to them. Just because it fits on the skid steer, however, doesn't mean it's the best solution.

"The universal quick-attachment system - for skid steers, compact track loaders, compact wheel loaders and compact tractors - is the same mounting on machines with a wide range of weights, hydraulic capacities and rated operating loads," says Jim Koch with Paladin. "Attachments, on the other hand, are designed to work with a relatively narrow range of specifications. There's nothing to prevent a rental customer from mounting an attachment on a machine and attempting to operate it. Just because the skid steer can mount it, doesn't mean the attachment can be effectively operated by that machine."

Robbie Angel, compact product specialist at JCB Inc. agrees, adding, "Just looking at the physical size of a skid steer will generally not tell the whole story on what that particular skid steer is capable of running."

This is the challenge for rental businesses, says Koch. "Right-sizing" - making sure the attachment is the right size for the skid steer operating it - helps "ensure that your skid steers and attachments are protected and your customers are satisfied with the performance of what they rent," he says.

What's the worst that could happen if a skid steer isn't properly matched to an attachment? "If an attachment is not sized properly, it can mean the machine and attachment will underperform, slowing the contractor's work or making his work less efficient," says Greg Rostberg with Bobcat. "Or, a machine may not be able to operate an improperly sized attachment at all. An improperly sized attachment may create an unsafe work situation when it's in operation. Attachments also vary in durability based on the machine they are approved on; using a standard-duty attachment on a larger machine may cause damage to the attachment."

It all boils down to an unsatisfied customer and /or broken equipment - neither of which is acceptable.

Some of the factors affecting attachment capability of a skid steer include the size and weight of the machine, the engine horsepower, the rated operating capacity and the hydraulic flow, says Rostberg. "Hydraulic flow is very important as some attachments require minimum flows to operate properly or can take advantage of high-flow hydraulics," he says.

For example, using a cold planer with a lower-than-required flow capacity will lead to premature breakage and wear on the cutting tips. Using an auger that requires more flow than provided will overheat both the attachment and skid steer.

Auxiliary hydraulic flow and pressure varies greatly from smaller to larger loaders and from one manufacturer to the next. The manufacturer's operating manual is the best place to look when matching a skid steer to an attachment.

Ron Peters with CEAttachments says instructions must be given to customers at the point of rental to ensure proper sizing. "If a customer is using a mid-range attachment, such as a broom, it could be used on a standard-flow machine; they would need to attach both of the hydraulic hoses. But a high-flow attachment, such as a cold planer or a snow blower, would usually need three hydraulic lines and absolutely need a high-flow machine; there's no way a high-flow attachment could operate on a standard-flow skid steer."

The role of rated operating capacity

"The tipping load is the weight within the bucket it takes to just bring the back tires off the ground," says Angel with JCB. "This is measured with the bucket at full reach, an operator of 175 pounds, and a full fuel tank. When fitting attachments, an operator needs to look at the weight of the attachment to be sure it does not exceed the rated operating capacity."

What the attachment is hauling or lifting needs to also be taken into consideration. "If the attachment is going to be hauling something, say for example a bucket hauling wet sand, the operator needs to be sure the density of the material in combination with the volume of the bucket will not exceed the rated operated capacity," says Angel.

Rostberg with Bobcat also notes, "Depending on the material placed in it, a heaped bucket can quickly reach the capacity for the machine," says Rostberg. "Because of this, machines have approved bucket sizes to keep the material within range of the machine. Larger, heavier-duty buckets can also weigh upwards of 700 pounds for just the attachment, leaving little room for material on smaller machines."

Rated operating capacity is also critical for the skid steer to remain safe and stable while lifting and carrying an attachment, as well as for providing adequate down pressure on attachments like cold planers, trenchers, tillers, etc.

The rated operating capacity can often be slightly increased by using an optional factory counterweight package, which can be added to the rear of the machine. Counterweights may be used in certain applications to gain increased attachment performance, but comes with some drawbacks, says Angel.

"Most likely the skid steer was designed to be the most efficient at its original weight so the counterweight might slightly reduce several aspects of the machines performance such as fuel economy, skid steering, etc.," he explains. "Also the counterweight will shift more weight over the rear tires in an unladen situation making the machine feel a bit more unstable in some conditions."

Another caveat - you should still closely follow the manufacturer's recommended limits for specific attachments and carriers.

The role of rental businesses

An educated customer is a satisfied customer. When approaching a customer about right-sizing skid steers and attachments, don't assume they know basic information, such as the difference between a high-flow and standard-flow machine and which attachments require a high-flow (stump grinders, cold planers, etc.). They also need to understand the consequences to oversizing or undersizing a machine, such as wasted fuel, wear and tear, and most importantly, any safety issues concerning not correctly matching the machine to the attachment.

A good starting point is to ask customers the make and model of the equipment they plan to use the attachment with. This will help identify the size and performance of the machine so that the properly approved attachment can be matched to the customer's machine.

It might also help to list the attachment's requirements for proper usage on the rental agreement. For instance, says Koch with Paladin, rental businesses can point out that the sweeper being rented requires an 1,800-pound rated load capacity and a maximum of 25 gpm. "The training of the customer should always include a discussion of appropriate specifications and potential damages that can arise," he says.

How to Buy a Skid Steer

How to Maintain Sweeper Attachments

TVH is offering Claire’s disinfectant and germicidal sprays to ensure customers have what they need to keep their workplace clean and their employees healthy.
TVH Parts Americas
October 28, 2020

Industry stakeholders are invited to join a free webinar on Oct. 20 at 12 pm GMT (8 am EST) looking at the state of the global powered access rental market and sharing key findings from the 2020 reports produced exclusively for IPAF.
International Powered Access Federation (IPAF)
October 16, 2020
Follow Us