Getting a Good Vibe 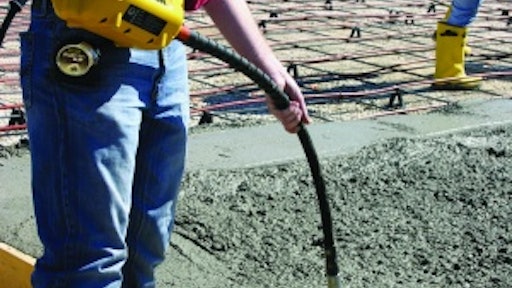 At first glance, concrete vibrators seem like a straight-forward piece of equipment; as if they're all alike. In fact, there are many types of vibrators and choosing the right one for the job can make a big difference.

All vibrators are not alike

"Electric flex-shaft vibrators are used for smaller jobs," notes Todd Jurjevic at Minnich Manufacturing. "There are several head sizes available, from 3/4 inch diameter up to 2 3/8 inch We recommend using as big of a head as your space will allow for better consolidation."

Ed Varel, engineering project manager at Stone Construction Equipment, notes that vibrators are not a "one-unit-fits-all" product. They are mostly sold in three pieces: motor, shaft and head.

With regard to the head, Varel highlights the choice of steel or rubber. "Rubber heads tend to consolidate the concrete a little better and they won't chip rebar. Steel comes in standard or pencil size, which can get into smaller spaces. Pencil heads are usually less than 1 inch in diameter."

When it comes to the motor, electric and gas-powered each have their benefits. Generally speaking, gas-powered vibrators offer greater horsepower, which means they can handle larger jobs, since larger jobs typically require larger heads, which take more power to achieve optimum consolidation.

Gas-powered units are not as portable, however. There are backpack vibrators, though, that offer 1 1/2 to 2 1/2 hp and are highly portable.

For their part, shafts come in a variety of lengths up to about 21 feet. The most common lengths are between 7 and 21 feet.

"Today's high-quality vibrators offer the operator protection against electrical shock and have circuitry built in to protect the machine against damage due to a variety of potential electrical problems," Paul says. Quality vibrators also have systems in place to ensure stable speeds under load, which is critical to achieving proper consolidation results.

Consolidation Should Be Considered in Both Design and Detailing