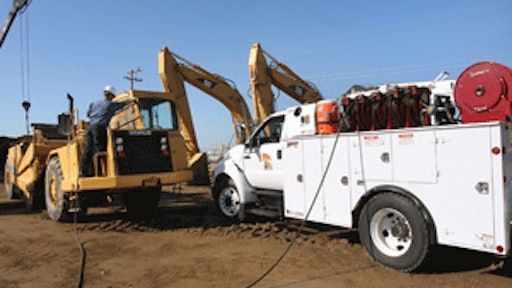 When John Peters started his rental business in 2000, he knew that providing his customers with field service was going to make the difference between success and failure. He definitely had the right idea, but he suffered through more than three years of nursing an old service truck before he hit on the key that would make his service program successful.

Peters started Golden Empire Equipment, which specializes in heavy equipment rental and serves all of central California, with a used mechanics truck that wasn’t equipped properly and didn’t meet his or his customers’ needs.

“We finally decided to purchase two new trucks, and that decision changed our whole business,” says Peters, whose company is based in Bakersfield, Calif. “That purchase made a statement that we are in this business and are going to remain in this business.”

In 2004, Peters bought his first two Iowa Mold Tooling Co., Inc. (IMT) Dominator® mechanics trucks from Lodi Equipment in Sacramento, Calif., and he just put in an order for two more trucks. “We looked at those trucks as an investment in our business and in our service capabilities,” he says. “We didn’t look at them as an expense.”

When Peters was running his used mechanics truck, he found that an unacceptable amount of time and money was wrapped up in repairs and downtime, and everyone knows downtime is a contractor’s worst enemy.

“The rental business is very time-sensitive because our customers’ businesses are very time-sensitive,” Peters says. “They don’t want to hear their rental house say, ‘We can’t make that repair right now because we have an old service truck that’s not working.’ When there’s a problem, we need to get there, take care of it, and get our customer back in the dirt. Not only are we not making money when the equipment is down, neither is our customer.”

So when Peters looked at how much money he was losing with his unreliable service program, he realized that the lease payment on a new mechanics truck was looking more and more attractive. “We found that we were already spending the lease payment, we just didn’t recognize it. We were in that common situation of saying, ‘I don’t think I can afford that,’ but when you really crunch the numbers, you can’t afford not to.”

Because of the nature of Golden Empire Equipment, it was never an option to go to the local pickup dealership and throw some tools in the truck bed. Peters’ company deals in heavy earthmoving equipment, so heavy-duty mechanics trucks are required. Their Dominator trucks are equipped with hydraulic air compressors, welders, and telescopic cranes with either 7,500 pound or 10,000 pound lift capacities. They also had IMT add rear work decks, tool drawers, and bolt bins.

“Our two-year-old trucks still look like they’re brand new,” Peters says. “They’re built to do the job that we’re asking them to do. Fixing our equipment with anything less would be like going to a gunfight with a squirt gun. We have a lot of things to be concerned about in this business, and we simply took one of them off the table.”

A Way to Grow

Golden Empire Equipment has grown significantly since 2000. Their employee base has increased, and they recently moved in to a new and larger facility.

“Providing field service to our customers has had everything to do with our growth,” Peters says. “We’ve been able to grow because we provide the level of service our customers expect. We look professional, we’re equipped professionally, and it gives our customers peace of mind that we will take care of the problem.”

More specifically, the purchase of the new mechanics trucks has led to growth because Golden Empire is saving money and attracting new customers who quickly become loyal patrons instead of giving them a reason to go down the road and give the competition a try. Investing in the service department also gave Golden Empire more leverage in the constant struggle to retain good mechanics, who are much happier when the bosses invest resources in the service department.

Peters says he has not regretted his decision for one second. His Dominator mechanics trucks are in use about 10 hours a day, five or six days a week.

“We are getting maximum value,” he says. “It’s something I feel so strongly about that we don’t even really pay much attention to it anymore. In our business, you have to provide great service to the customer. It’s not even an option.”

In this episode of Rental Rundown, Editor Alexis Brumm hung out with Adam Kropf, head of product and development at Texada Software.
Texada Software
Jun 8th, 2021

Whether you worked through the winter or are just now taking your equipment out of storage, getting your machines into tip-top shape for the summer will ensure that you’re ready for the busy season when it arrives.
TVH Parts Americas
Jun 4th, 2021

Attendees will have a chance to take an in-depth look at the company’s leading engineering practices and interact with senior staff at the event at Booth #N2468
Tsurumi America Inc.
Jun 3rd, 2021

This is the official launch of IPAF's app, leading off in the UK and Ireland, with the next phase rolling out in other territories and languages in the coming months.
International Powered Access Federation (IPAF)
Jun 3rd, 2021