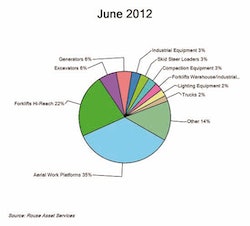 Sales by major category for the construction rental industry in June 2012 shows aerial work platforms at the highest amount of sales.

According to the U.S. Census Bureau:

According to information from the Equipment Leasing and Finance Association:

(More on equipment finance activity for 2011…)