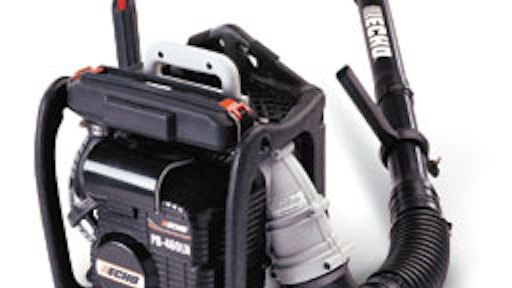 If you're a subscriber to this magazine, then chances are you use a backpack blower sometime during your workday. They are popular with people moving large volumes of debris in cleanup applications for sweepers, crack sealers, sealcoaters, or anyone else looking to clean up a site before or after a job. But not everyone thinks they're so great. Over the last 10 to 15 years, dozens of communities across the United States have banned or restricted the use of gas-powered blowers, citing noise, emissions, and dust creation as a public nuisance. If you've been around the industry long enough to have used a backpack blower manufactured prior to the 1990s, then you can understand where all those negative feelings came from. However, the gas-powered blowers of today are a different story,

"There's no question about it — the older designed blowers and certainly the larger blowers were just plain noisy," says Larry Will, vice president, Echo Inc. (retired). "We've done things to improve that across the line. Not all blowers are super quiet, but they are certainly quieter than they used to be."

Reducing noise, although not mandated by a government agency, has been an issue the industry has taken on as a goal because of the simple fact that these blowers were noisy, both for neighbors and operators, and something had to be done. In addition to the issue of noise, the blower industry has also addressed emissions. Reducing emissions has been mandated by the EPA, and today's gas-powered blowers have up to a 90% reduction in hydrocarbon emissions compared to blowers manufactured in the early 1990s. The dust issue, however, is something blower design can do little about. This problem is best solved by operators who are knowledgeable with their machines and know how to avoid stirring up dust.

When you choose a backpack blower, you need to look at the performance of the machine and how it will fit your needs. You should consider two factors when looking at blower performance — the velocity of the air coming out of the end of the nozzle and the air volume, or the cubic feet per minute of air that's forced through the unit. Air velocity lifts up the debris you're trying to sweep away, and the air volume carries it away. The air volume is related to the total horsepower of the unit, so naturally a unit with a higher horsepower generally will have more air flow. Backpack blowers can vary greatly in horsepower. The air volume from 1 horsepower blowers generally will supply about 300 cubic feet of air per minute at the tube tip, while a 4 horsepower unit normally will supply over 600 cubic feet of air per minute. Bigger blowers, however, will also generate more sound.

Another topic to consider when looking at backpack blowers is operator comfort, and for many people, the number of pounds a unit weighs is at the top of the list in that respect.

"Weight is an issue we hear about all the time — we hear guys say they don't want a certain blower because it weighs 'three pounds more' than another one," Will says. "But if you have to wear it on your back all day, you'd be surprised — that's a lot of weight."

Shindaiwa recently introduced the EB630, which has several features designed for operator comfort, including a contoured back pad made of breathable nylon to help keep operators cool on hot days, and padded shoulder straps. The tube and throttle stick were also designed with ergonomics in mind.

Companies include a host of different features on their units to make them easy for an operator to use. You may have to do some research to find the options you prefer.

"One thing a contractor should do is go to their dealership and try on some backpack blowers and see how they feel," Larsen says. "There can be big differences in comfort level between machines."

Noise is by far the biggest complaint you hear when it comes to gas-powered blowers. Past blowers emitted a loud, whining noise during operation, which would fluctuate like a siren according to throttle speed. This noise at 6 a.m. on a Saturday could be disruptive in a residential area, and it's these blowers that incited the dozens of regulations and bans on gas-powered blowers across the country.

Manufacturers became well aware of the noise problems and how these bans and regulations were affecting the industry. They spent a great deal of time on research to reduce blower noise, with many companies coming up with great advancements.

"It's actually the impeller that causes that high-pitched, annoying noise that people tend to complain about," Larsen says. "So designing impellers that are quieter is a main focus for manufacturers right now. And through operator training, as far as what times to use a blower and how to operate them correctly, we have avoided a lot of issues across the country as far as these complaints."

Both Shindaiwa and Echo have backpack blowers with significant reductions in dB(A). Echo Industries sells three gas-powered blowers that have 65 dB(A) at full throttle — two of them backpack units, the PB-260LN (low noise) and the PB-460LN, also known as the "Quiet 1." About 10 years ago, Echo blowers of a comparable size were about 76 dB(A). The reduction down to 65 dB(A) represents a nearly 75% noise reduction. Shindaiwa's EB240 hand-held blower and its EB480 backpack blower register less than 70 dB(A), and the EB630RT backpack blower is less than 70 dB(A) when operated in the "Hush Mode." All have further reduced dB(A) when used less than full throttle.

Backpack blower manufacturers across the industry have spent a lot of time and research in order to comply with EPA and California Air Resources Board (CARB) regulations on small engines. As of January 1, 2005, the EPA and CARB regulations agree. The state of California no longer requires a stricter set of emissions regulations. Over the last decade or so, emissions standards set by these two entities have fueled an emissions reduction for small engines by as much as 90%.

"We've taken emissions from 230 grams of hydrocarbons per horsepower hours down to less than 37. The standard is 37, but the assembly line production level has to be much lower in order to be sure we never go over 37," explains Will.

This major reduction in hydrocarbon emissions was established through fine-tuning carburetion and mufflers, and in some cases completely redesigning engine components requiring new engine block lines, cylinder lines, and piston lines, which are expensive manufacturing machines.

"Primarily leaner carburetor settings and smaller jet sizes have been our main focus for reducing emissions on backpack blowers, and in that regard there hasn't been a problem in meeting emissions standards," Larsen says.

The small engines industry has made great strides in reducing noise and emissions in order to make their products more appealing to the public. Now it's up to contractors to embrace those changes and help turn around the negative and outdated perception many people have about these products. This can be done through the proper use and operation of modern quiet leaf blowers.

Gas-powered blower manufacturers use a sound measurement that's standard across the industry. They measure dB(A) (decibels weighted on the A scale) at 50 ft., from eight different points, and average those readings together for a result. Decibels are measured on a logarithmic scale. For example, a 6 dB(A) reduction results in a 50% reduction in sound. If noise were reduced another 6 dB(A), it would result in a 75% overall reduction in sound.

The Outdoor Power Equipment Institute has a bilingual pamphlet called "Leaf Blowers: A Guide to Safe and Courteous Use". The pamphlet provides information on courteous use, dustless operation, reducing noise, and other helpful tips. It can be downloaded at their Web site, http://opei.org/guide/leafblower/index.asp.

With more than 1,100 cfm of air movement, the C5 makes cleaning up yards, flower beds, driveways and patio areas quick and easy.
Little Wonder
May 20, 2014

Under the new Trade Up To Optimax Program, which runs until September 15, 2012, customers can trade in their current blower for the latest Optimax Blower and receive a $100 rebate.
Little Wonder
June 25, 2012