Environmental efforts employed eight Tsurumi KTV submersible pumps for the construction of a new fish passageway that connects isolated ponds to a nearby river. 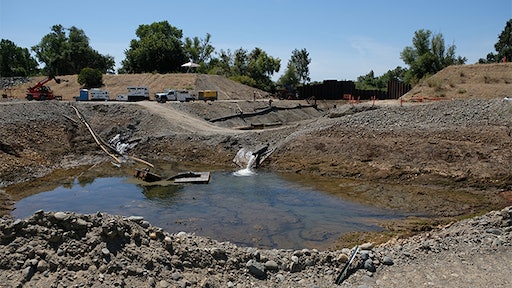 The California Gold Rush may have ended over 150 years ago, but its effects can still be seen in rivers and surrounding land that it took place in stretches of northern California. The Oroville area, about an hour’s drive north of the state’s capital of Sacramento, became famous for fortune seekers in the middle 19th century — people who left the East Coast and Midwest seeking quick fortunes. In the end, most didn’t make it, but the environmental damage was done.

The area was dredged for gold, resulting in acres of rock and sand piles. During wet seasons, the river would run high and water would flow into the area, leaving the wildlife trapped once the water levels returned to normal.

A project helped reestablish plant and animal habitats in Oroville. It was part of a multi-agency effort to improve water streams and flood management in the Oroville Wildlife Area next to the Feather River.

In an effort to restore the destructed habitat, the Olivehurst, California-based company Nordic Industries was contracted to create a channel to serve as a passage for native salmon and other fish to return into the Feather River. 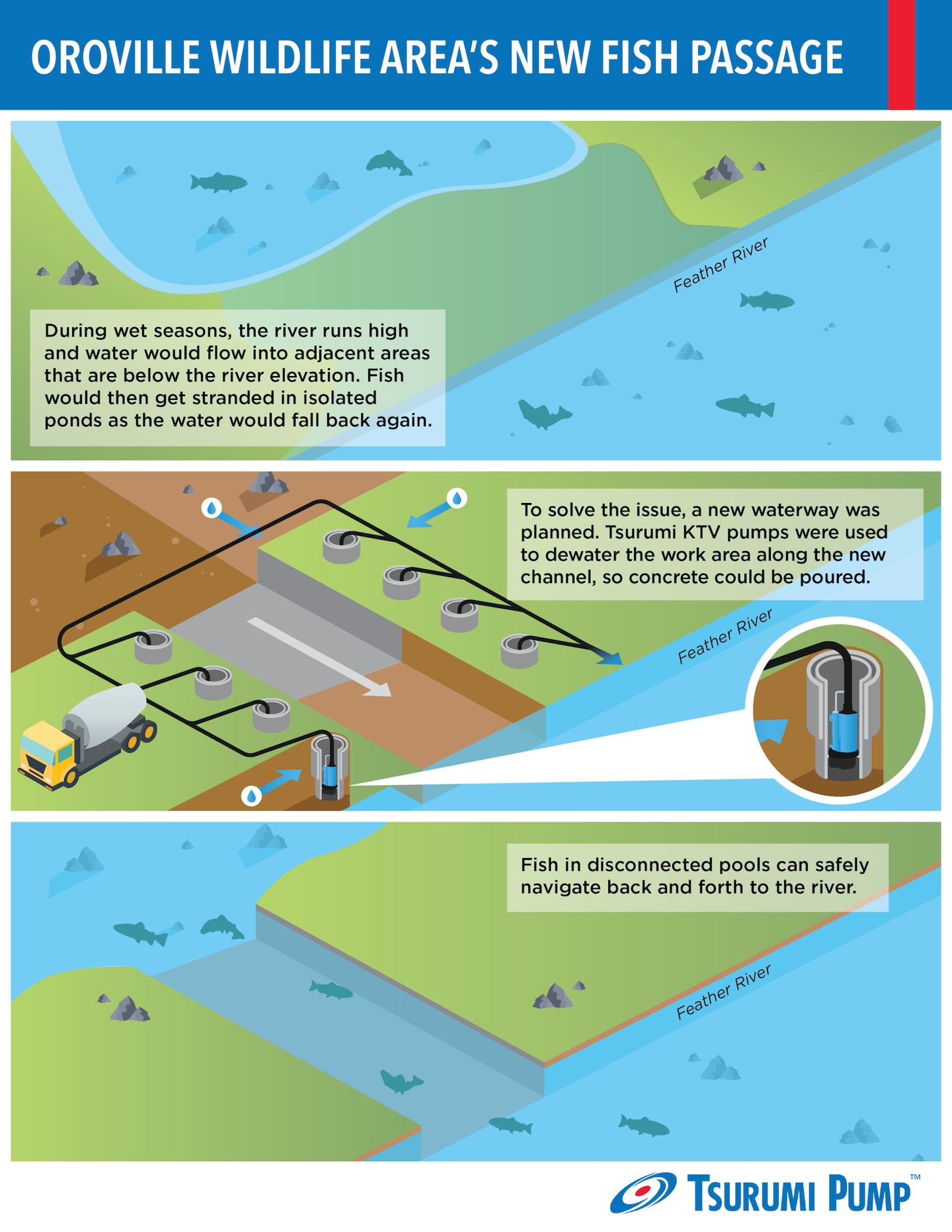 To build the crucial infrastructure to allow fish to navigate in and out of isolated ponds in the protected area, environmental engineers determined a plan to remove the large sums of water so construction could later be completed. The engineers placed eight Tsurumi KTV2-37 5 horsepower pumps into narrow well casings on both sides of a new waterway. The pumps’ main role was to dewater the work area and allow concrete pouring.

“The channel is significant because it contributes to salmon runs in the region, making it possible for fish to return to the river and ocean, no longer interrupting their spawning cycles,” explained Patrick LaZansky, specialty sales representative at the Roseville, California-based rental company Herc Pro Solutions, which supplied the dewatering design and Tsurumi units for the project.

LaZansky said the Tsurumi pumps were the ideal solution to dewater the jobsite, as the area in which the channel was built is below the river elevation and also below the elevation of the area that floods on occasion. The pumps handled both ground and surface water, keeping the area dry so workers could form and pour concrete.

“We needed reliable pumps that could work 24/7 moving water from the construction site,” he said. “It was a tough job as the pumps needed to transfer water in an abrasive environment. The water was additionally boosted to a settling basin about 1,000-ft. away, which then percolated back into the river.”

The Tsurumi KTV series pumps are built with a die cast aluminum body and elastomer pump end to reduce weight and to allow easy handling. Their semi-vortex impeller allows for maximum particle passage without compromising parts. The top discharge and slim design allow for well dewatering in a 12-in. well casing. In addition, the need for impeller efficiency adjustments has been eliminated.

Box culverts were also added to the effort to connect the insulated bodies of water, contributing to the improvement of fish populations.

The project was carried out by the Army Corps of Engineers and the Sutter Butte Flood Control Agency in coordination with the California departments of Water Resources and of Fish and Wildlife. The phase of the restoration efforts was completed in October of 2019.

The FSB-150H Hydraulic Walk Behind Saw