A New Look for American Presidents 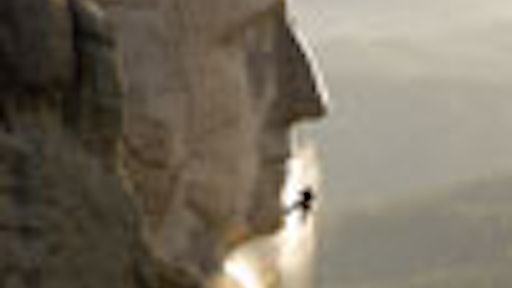 Winnenden, 29 July 2005 – The cleaning work on Mount Rushmore in South Dakota has been successfully completed on schedule. Hartmut Jenner, managing director and spokesman for the board of Alfred Kärcher GmbH & Co. KG officially handed over the cleaned monument to Gerard Baker, the superintendent of the National Park Service (NPS) at Mount Rushmore. He took this opportunity to present one of the pressure washers used for the operation to the Park Service and announced a long-term sponsorship for the presidents’ heads: Kärcher would be happy to take on the preservation of this famous monument in the future and carry out regular inspections and cleaning operations in collaboration with the NPS.

The cleaning project ran according to plan: The five diesel-powered Kärcher HDS 1000 DE hot-water pressure washers, through which about 7,000 liters of water were pumped every day, performed without a hitch over the whole period. They had been lifted by helicopter and placed immediately behind the heads at the beginning of the project and were exposed to the elements for four weeks. As expected, the aim of the cleaning project – to remove layers of dirt that could damage the rock without detrimentally affecting the surface of the sculpture, was accomplished. Something that had not been expected was the fact that optical cleanliness of the monument, as perceived from the observation platform, has been noticeably improved: The heads have actually been visibly lightened by the high-pressure wash with pure boiling water and now stand out more from their natural background.

Sculptor Gutzon Borglum’s giant heads of American Presidents George Washington, Thomas Jefferson, Theodore Roosevelt and Abraham Lincoln were carved between 1927 and 1941. They are about 60 ft (18-meters) high and, along with the Statue of Liberty in New York, probably the best known monument in the United States. It is located near Rapid City in South Dakota and is managed by the National Park Service, together with the museums and other facilities.

The success of the operation was mainly due to the excellent and smooth co-operation that existed within the German-American cleaning team from the very beginning. The German embassy in Washington used this occasion to award the German-American friendship prize to the National Park Service at Mount Rushmore.

In the past 20 years Kärcher has carried out some 80 cleaning projects on historical monuments. For example, the Brandenburg Gate in Berlin and the Statue of Christ in Rio de Janeiro were cleaned gently and expertly in 1990. The Colonnades of St. Peter’s Square in Rome were cleaned in 1998 in the largest facade cleaning project ever undertaken on a historic building. Two years ago Kärcher specialists removed harmful layers of dirt from the more than 3,300-year-old Colossi of Memnon in Luxor, Upper Egypt. Cleaning projects in 2004 included the National Library in Athens and the ancient town and harbor wall in Piraeus as well as other monuments.

Alfred Kärcher GmbH & Co. KG is a family-own company based in the town of Winnenden near Stuttgart, in south-west Germany, which specializes in the development, production and distribution of cleaning technology and equipment. The product portfolio includes high-pressure washers, blasting systems, vacuum cleaners, sweepers and scrubber-dryers as well as cleaning agents, vehicle washes, drinking water treatment and waste water treatment plants. The company has 5,600 employees and achieved a sales volume of more than one billion euros last year.

Karcher's North America's new line of electric pressure washers with TruPressure deliver up to 30% more cleaning pressure than competitors, according to the manufacturer
Karcher
February 28, 2017