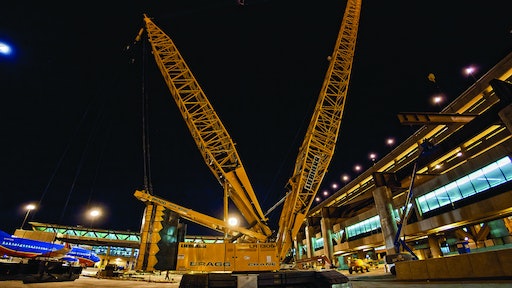 Visitors to the City of Phoenix Sky Harbor International Airport can see the structure taking shape for the Sky Train transit network. The elevated guided rail system will offer passengers free transport between the airport's busiest terminal, Terminal 4, and the Metro Light Rail station and East parking lots. Scheduled to begin operations in the first quarter of 2013, much of the overhead structure is already in place.

The Liebherr LR 1300 features a 600-hp engine and offers a maximum line pull of 33,000 lbs. when working with the top layer of rope on the drum and 47,400 lbs. on the first layer. Lifting operations are further speeded by the ability to simultaneously boom out and luff the jib with a full load on the hook. In addition, the Liebherr Litronic LMI system calculates the load chart in real time, which means that the operator can select any boom angle between 45 and 88 degrees, instead of only the angles specified in the load chart.

Configuring the crane with the derrick and counterweight tray allowed navigation of the underground tunnels and provided more flexibility -- using the tray for the heavy lifts and disconnecting it to handle the smaller lifts with more efficiency.

Operating the crane within 100 ft. (30m) of airplanes involved special issues that Bragg had to address to satisfy the airport's strict requirements. Boom height, working hours, security, and underground tunnels were just a few of the obstacles addressed prior to the mobilization of the equipment.

Matting was a huge issue as wood chips present a hazard to airplane engines. Bragg's solution was to use rubber conveyor belt sections from some of its customers in the sand and gravel industry. This helped protect the 24-inch (600mm) thick concrete and eliminated the risk of loose particles infecting the jet engines. Another benefit of the matting solution was that it could be quickly rolled out at the beginning of each shift and rolled up at the end. To enable the airport to keep more gates open during the day, Bragg worked only at nights, from 10 p.m. to 6 a.m.

In a separate section of the project, Bragg also erected 131 precast concrete girders in two phases. In the first phase, in August, Bragg set 79 girders in nine days. In the second phase, in September, it set 52 girders in a week and a half. These girders spanned up to 100 ft. (30m) and weighed between 45 and 70 tons (40 and 63 tonnes). For these lifts, Bragg used 300-ton truck cranes.

Phoenix Sky Harbor has outlined plans to extend the guided rail system in the future to connect with the other terminals, as well as the car rental car facility some 10 miles away.

Inside the chassis of the MOFFETT M4, Hiab constructed a zero-emission truck-mounted forklift powered by lithium-ion batteries with new controllers and the new Human Machine Interface (HMI) that displays battery capacity, machine performance, and more.
Hiab
December 14, 2020
Follow Us