Wind turbines take time and the right equipment to build, and Dawes Rigging & Crane rental supplied nine cranes to help construct one of the largest wind turbine projects in the U.S. 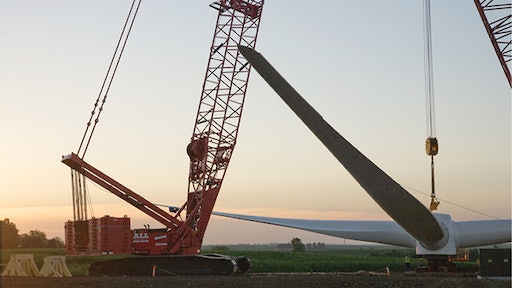 Erect 193 wind turbines that weigh over 300 metric tons each and are nearly twice the height of Niagara Falls.

The Rolling Hills Wind Energy Center project in Massena, in southwestern Iowa, is the largest wind turbine project ever built in the state of Iowa and one of the largest in the country. Consisting of 193 wind turbines each with a rated output of 2.3 megawatts (MW), the Energy Center’s maximum capacity will be 444 MW, which is enough energy to power 190,000 homes.

A $425-million project, Rolling Hills was developed and is owned by MidAmerican Energy of Des Moines, Iowa. The project contractor is Minneapolis-based Mortenson Construction. Rolling Hills is Mortenson's 100th wind farm project and its largest so far.

These huge wind turbines – which are nearly twice the height of Niagara Falls - take months to erect and require some heavy-duty lifting power. In this case, the power came from Dawes Rigging & Crane Rental Corp., Milwaukee, Wis., a member of The ALL Family of Companies. Mortenson hired Dawes to supply nine cranes, including three 440-ton Manitowoc 16000WA (wind attachment) crawlers.

All of the 193 wind turbines for the Rolling Hills project are Siemens model SWT 2.3-101. The nacelle, which sits atop the tower and includes most of the working parts of the turbine, weighs 82 metric tons. The erected hub height - the distance from the turbine base to the rotor shaft - is 262 feet. The rotor weighs 62 metric tons, and the tower itself weighs 162 metric tons. Each blade is 161 feet long, and the overall rotor diameter is 331 feet.

Experienced crews from Dawes have been on site at Rolling Hills since the job began to disassemble, move and reassemble the cranes around the site as the turbines go up. Scott Jerome, senior branch manager at the Dawes Kaukauna branch, says that Dawes’ expert crews have been moving not only their own cranes for Mortenson but also a few other machines on the site. “Countless moves so far have been done safely, cost effectively and in time frames meeting or exceeding Mortenson’s requirements,” Jerome said.

Dawes’ three 16000s at Rolling Hills were configured with 292 feet of main boom and a 24.9-foot extended upper boom point, or wind tip. In addition, the Model 16000WA offers 35,000 lbs. of line pull, which offers power and speed for wind turbine installation.

The wind attachment eliminates the need for longer fixed or luffing jibs. With a luffing jib, the cut-off wind speed for safe operation is much lower than that of just a boom and wind tip. The use of luffing jibs can often cause delays when erecting wind turbines, as by its very nature, the work takes place in windy locations.

Used to unload all heavy wind turbine components at each turbine location, the Manitowoc 2250 Series III crawler cranes are also used to set the base and lower tower sections. Mortenson has two on site.

The company is also using one Manitowoc 888 Series II crawler at the wind turbine lay-down yard to unload and reload turbine components as they come in and also for distribution on the project site. The 888 is also used as a fail safe for hub and rotor construction at individual turbine sites that have space limitations or where traveling with the load is required.