The compact and versatile SPD360 Jekko minicrane allowed for work in tight areas of the monument's foundation and easily adapted to the irregular footing. 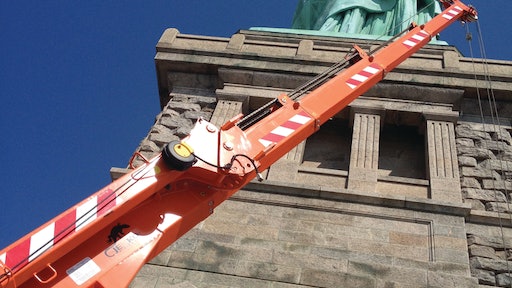 The project involved the addition of two new staircases to allow easier access to and from the platform's observation deck, the renovation of a third staircase, the removal and reinstallation of 3,400 sq. ft. of granite pavers and wall panels, and the overall manipulation of approximately 85 tons of stone.

At 151 ft. tall and 225 tons, The Statue of Liberty cuts an impressive profile in New York Harbor. In 2011, the 154-ft. granite pedestal on which she stands underwent renovation that involved the replacement of nearly one hundred tons of stone pavers and granite wall panels. Ironically, the renovation of such a massive national monument succeeded in part because of invaluable lifting assistance from one of the smallest – and most versatile – cranes on the market, the Jekko.

In September of 2011, The National Park Service kicked off a $30 million upgrade on The Statue of Liberty National Monument to allow for better safety and security while maintaining the historic look and finish of the monument.

The project involved the addition of two new staircases to allow easier access to and from the platform’s observation deck, the renovation of a third staircase, the removal and reinstallation of 3,400 sq. ft. of granite pavers and wall panels, and the overall manipulation of approximately 85 tons of stone.

The project’s stone subcontractor, Phillipsburg Marble of Phillipsburg, NJ, recognized that it needed a very specialized piece of equipment. One that could lift, hold and maneuver the pavers and slabs, each of which weighing between 300 and 1,000 lbs., but still work in a confined area at the base of Lady Liberty. Phillipsburg Marble reviewed its options and selected a Jekko SPD360 minicrane to do the work.

The SPD360 is less than 3 ft. wide and just over 6.5 ft. tall when fully retracted, yet its boom expands to nearly 28 ft. and it can lift almost 4,000 lbs. The boom can rotate 360 degrees, and its outriggers can be adjusted to stabilize the crane with two, three or four “legs”. The crane is operated via the proprietary man-machine interface, which allows one person to monitor all of the minicranes’ systems.

“We went with the Jekko because it was compact, versatile, easily deployed and easily secured during work on some irregular footing,” says Bob Barron, owner of Phillipsburg Marble. “We needed the crane to be able to remove and install pavers and panels, all of which had to be mechanically stabilized and anchored on the top and bottom.”

According to Jeremy Kazimar of Area Rentals, the versatility and adaptability are two of the many great reasons why so many of his customers from different industries have used and reused the Jekkos.

“Their battery and electric power allows a single operator to do work inside public buildings, utilities, and other confined areas that do not allow gas engines,” Kazimar says. “The SPD360 is compact enough for one person to maneuver inside or out, and it has one of the best load charts in the industry.”

Rich Caudill, service manager of JekkoUSA, says that he continues to be surprised at the number of applications companies are finding for the Jekko cranes, but he counts the Statue of Liberty Monument Project among the ones about which he is most proud.

According to Caudill, Jekkos have been used in glass installation, stone setting, municipal and agricultural applications, motion picture production, water treatment, steel erection, demolition, statuary and art exhibit arrangement and more. He cites the ease with which the Jekkos can be used as a reason for the equipment’s popularity.

“One of the benefits of the Jekko is that it was able to stabilize itself to work on some less than optimal surfaces where not all four of its outriggers could have the best footing,” Barron says. “And all of this maneuvering and adjusting could be managed by one person while other technicians helped secure the stone in place.”

Project was started in the fall of 2011 and the statue and grounds were reopened on schedule to the public on October 28, 2012, but had to be closed just a few days later as a result of damaged sustained on the island from Hurricane Sandy. The monument is scheduled to open in the summer of 2013, and the safety additions to the pedestal and observation areas will make it more accessible to the more than 3 million people who visit the monument every year.