Grove GMK6400 allows Greiner Industries to win numerous jobs that it could not previously. 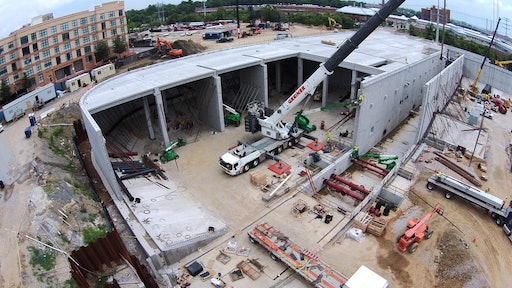 It’s been nearly a year since Greiner Industries received its Grove GMK6400 and since then, the crane has worked tirelessly. The company is completing all types of projects with the 450 USt capacity all-terrain crane – highway projects, construction jobs, factory maintenance and much more, repeatedly surpassing its own productivity and efficiency records. What’s more, the Mount Joy, Pa.-based company is bidding and winning jobs it never did before it took delivery of the GMK6400.

Ben Daugherty, crane division manager at Greiner, said the GMK6400 has fundamentally changed his company. It’s already racked up some 1,500 hours since August of 2013. Initially, Daugherty said, Greiner was looking at seven-axle 500 USt cranes, but then took notice of the 6-axle GMK6400.

“In our market, there are a lot of 500 USt cranes. Initially, I was going to buy a similar crane, but decided to do something different that would enable us to be competitive – to stand out from all of the other companies,” Daugherty said.

The decision changed Greiner’s lifting business, as it began to win jobs it couldn’t previously. With only six axles making for a compact footprint on the GMK6400, Greiner has been able to work on job sites where seven-axle cranes can’t fit. Yet, the company still has the lifting power of a 450 USt crane to complete jobs that typically require larger cranes.

Take a recent Greiner project at a Glatfelter paper company plant. Once a year, the plant shuts down for routine maintenance. Greiner bid on the job to change out evaporator effects inside the plant, going up against several seven-axle, 500 USt cranes owned by its competitors. And with space on the job site at a minimum, Greiner had the advantage with the GMK6400’s compact size.

“Initially, Glatfelter was doubtful we could complete the project, but once we showed them the GMK6400 and its capabilities, we were awarded the job,” Daugherty said. “We were less expensive than the bigger cranes and because our crane would take up less space in the plant, the company was able to keep a service line open and continue working.”

Greiner lifted inside the plant for 11 days straight, changing out the 15 USt evaporator effects 24 hours a day – a new company record. The lifts were up to 150 ft tall, and the loads were another 160 ft away from the crane in radius, so Greiner used the GMK6400’s luffing jib to cover the large diameter. The company rigged the luffing jib inside the plant, and then moved the crane into place.

Soon, Greiner will surpass another company record with the GMK6400, spending up to an estimated 80 straight days lifting on a project to help construct the Alexandria Renew Nutrient Management Facility, a wastewater treatment plant in Alexandria, Va. This time the company is using the crane’s heavy lift jib to tilt and place precast concrete panels. The crane is rigged with 131 ft of main boom, along with the heavy duty jib, to lift 25 USt panels from a radius of 105 ft.

The wastewater treatment plant is unique, as it’s being constructed over an old landfill. The precast panels provide the walls for the structure, where water tanks are being placed. A roof will be placed over the tank, then it will be covered with ground and a soccer stadium will be constructed on top.

“I could not have won or completed this job without the GMK6400,” Daugherty said. “It’s the largest contract that we’ve ever won at Greiner.”

The varied amount of work that Greiner is completing with the crane is testament to its versatility. Beyond the reach, capacity and compact nature of the crane, Daugherty points to five outrigger positions as a key feature. Greiner has found great use in the three-quarter position.

“The seven-axle cranes are a lot wider from outrigger mat to mat, and most companies’ cranes have only mid- and full-outrigger positions,” he said. “If I’m in a restricted space, I can run the outriggers in a 24 ft stance and still have a very impressive load chart.”

The MEGATRAK suspension with MegaDrive has also been especially useful. Already utilizing a smaller footprint than all other cranes in its lifting class, the independent all-wheel steering makes it even more maneuverable. This, for example, is what allowed Greiner to set up the luffing jib on the paper plant project and easily move the crane into the tight quarters from which it needed to lift.

Greiner has also made good use of the crane’s self-rigging MegaWingLift attachment, which boosts capacity by nearly 70 percent. In fact, Daugherty said the company has used the crane in nearly every configuration possible since taking delivery.

Greiner purchased the GMK6400 from Harrisburg, Pa.-based Stephenson Equipment. The two companies have been doing business together for some 20 years. Daugherty said the stellar product support from the Manitowoc Crane Care partner was another reason to purchase the crane.

“Stephenson will drop whatever it’s doing to support my needs and that’s a huge selling point – other companies don’t have that kind of product support,” he explained. “The first night we had the GMK6400 we took it to work on a bridge project. We were very unsure about using a new crane on a job so soon after purchasing it. There was a $20,000 charge for each hour if we went over the scheduled stop time. Stephenson sent a technician to stay with us overnight for 12 hours just in case something happened. That kind of support is priceless.”