Because the entertainment industry is going to show strength again after overcoming the current situation, the industry’s demand for aerial equipment is going to grow. 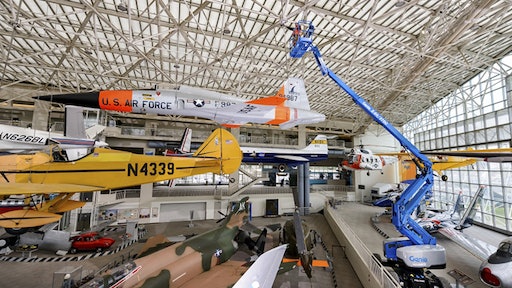 This article was originally featured on Genie's Aerial Pros site. It has been edited here from its original version.

From auto racing and amusement parks to movie sets and stadiums, aerial equipment applications reach beyond the typical construction and maintenance settings. The entertainment industry, like other industries, demands both top-level performance and versatility from its equipment. A single lift might be found positioning light diffusion frames in the air at a studio in Hollywood and then be used to help create artificial rain on an outdoor set in Los Angeles later that week.

Because the entertainment industry is global, aerial equipment—known as MEWPs (mobile elevating work platforms) or AWPs (aerial work platforms) —could as easily be found on a studio set in Hollywood as they would in Paris or Sydney. For example, studio technicians and grips, who often position loads approaching 1,000 lbs., have found that Genie XC boom lifts are especially useful as a result of their ability to provide critical capacity with a wide range of vertical height and horizontal reach. In addition to the standard 660-lb./1,000-lb. dual capacity envelope, Genie XC booms also offer the entertainment industry specialized options such as non-reflective flat black paint, adjustable controls, and specific approvals to get work done in an unique setting. 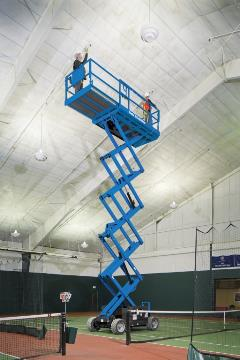 GenieIt’s not just boom lifts on these sites either. The entertainment industry’s needs, like those on other jobsites, also might call for scissor lifts, personnel lifts, and even non-MEWP equipment like material lifts. For example, the ESPN Wide World of Sports Complex, located in the middle of the Walt Disney World Resort near Orlando, Florida, employs both state-of-the-art broadcasting on equipment and a fleet of Genie booms and scissor lifts to give fans a birds-eye view of the action on the field.

Dubai Parks and Resorts, set to be the largest integrated leisure destination in the Middle East, is comprised of three theme parks and a water park, spreading across 25 million sq.-ft.—the equivalent of 420 football fields—utilizes several Genie Z-60/37 DC all-electric booms to handle the broad spectrum of maintenance duties with the different parks, which, thanks to the units’ low noise levels and emissions-free operation, allows the properties to operate these machines all day long without disturbing visitors.

In addition to providing support for ongoing needs, Genie aerial lifts are also used for special events. For instance, a few years ago, the World FIA Formula E Championship, held at Batter Sea Park, London, utilized a Genie Z-60 FE hybrid boom and a Genie GS-2669 BE scissor lift to lift the cameramen up to just the right height to help ensure the perfect direct television broadcast —without impact on the environment.

And when the Castellet race track in France hosted the Formula 1 Grand Prix for the first time in 28 years, race organizers were looking for a solution that would allow TV viewers to watch the entire race close up—from the incidents on the first lap just after the hairpin bend to the victory of British driver Lewis Hamilton. Rental company FRECHE Location recommended a Genie Z-135/70 articulating boom lift as a solution.

Because the entertainment industry is going to show strength again after overcoming the current situation, the industry’s demand for aerial equipment is going to grow, with new filming locations, larger sets, bigger crowds, and more events. Therefore, a Genie boom lift used in an entertainment studio one week could easily be put straight to work on a large commercial construction site the very next week.

This machine features all of the required safety updates such as overload sensing, slope and tilt sensors, and a saloon-style entry door.
March 16, 2021