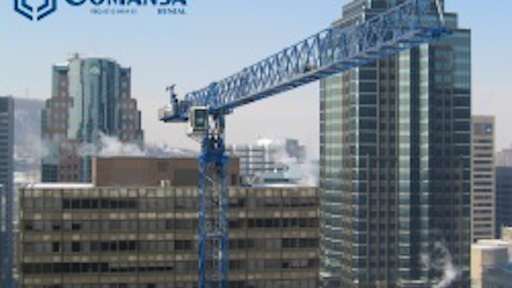 The Government of the Quebec province has launched an ambitious plan to redevelop and modernize its healthcare system, with the purpose of giving both patients and workers the environment they deserve. To make it possible, it has established a Public-Private partnership (PPP) with two universities, with whom it will built Canada’s two biggest hospitals.

For both projects, and other two hospitals in Montreal, a total of fourteen Flat-Top tower cranes from the Spanish manufacturer Linden Comansa are being used. All the cranes are provided from distributor Linden-Comansa Canada (Location Comansa), who has rented them to associated sister company Alliance Formwork, the main formwork contractor for all these projects.

One of the two major hospital networks in Montreal is the University of Montreal Hospital Centre (Centre hospitalier de l’Université de Montréal, known by its acronym CHUM), who started the construction of the superhospital in 2011. Located in the heart of downtown Montreal, in the Quartier de la Santé (or Health neighborhood) due to its proximity with other medical and research facilities, the New CHUM will be Canada’s biggest hospital construction. When it opens in 2016, its 268,000 square meters will host 772 individual rooms, 26 hospitalization units and 39 surgery rooms among many other facilities. Furthermore, it will be completed in 2020 with one Library, one Amphitheatre and clinical administration building.

The other two cranes, one 21LC290 and one 21LC210, used Linden Comansa’s internal climbing system, which had never been used in North America before. "Both cranes have been jacked up from an initial height of 69.3 meters to a final height of 137 meters. It was the first time we used the internal climbing system and I am impressed. The jacking-up worked very well and the learning curve was short due to the facility of its operation", said Carl DiChiara, Eng. Project manager for Alliance Formwork.Four Linden Comansa tower cranes, all of them with maximum load capacity of 18 tonnes, are working on the project. Two of them, a 21LC550 and a 21LC210, have been externally climbed with the hydraulic jacking cage, to reach heights of 151 and 140 meters respectively.

According to Simon Drolet, Eng. tower crane Engineer for Linden-Comansa Canada (Location Comansa), "the New CHUM is a very challenging project due to the height of the construction. We had to climb each of the four cranes five times to reach the final heights. The strategic location of the 21LC550 on the site has been a great advantage for the erection and future dismantling of the other three cranes. The use of the 21LC550 for these tasks saves costs of auxiliary cranes, and helps to minimize the fully closing of the roads that surround the site".

The University of Montreal is also building a new building at the city’s Sainte-Justine children's Hospital. This seven-storey building will house a new research center and new facilities for intensive care, surgery, 14 surgery rooms, a neonatology unit, etc.

Currently working on its construction are two tower cranes, models 21LC400 and 21LC290, although there were three Linden Comansa cranes before. A 21LC210 has been dismantled recently by the 21LC400, which was used for the erection of the 21LC290 as well. The main work of the cranes, all of them with maximum load of 18 tons, is to hoist pieces of formwork and assist in the work of concreting.

According to Simon Houle, Eng. Project management director for Alliance Formwork, "the use of Flat-Top tower cranes allowed to limit the total height of all cranes, thus increasing the security of the entire project providing better visibility of the jobsite to the crane operators, and saving a huge amount of money in installation and dismantling".

The McGill University Health Centre (also known as MUHC, or CUSM in French) is Montreal’s other major hospital network, and since 2010 is running a 2.35 billion dollar (Canadian) project to redevelop its facilities. Among all procedures, stands out the construction of the Glen Campus, an enormous complex to be open in 2014 which fully integrate patient care, research, teaching and technology. It will host 6 different institutions, such as two hospitals for children, a Research Institute and a Cancer Centre.

Out of the 13 cranes used on site, 5 have been Flat-Tops from Linden Comansa. Four from model 21LC290 and one from model 21LC210, having all of them maximum load capacity of 18 tonnes and freestanding heights from 46.6 to 74.1 meters.

"The five Linden Comansa tower cranes average more than 500 lifting operations per day without any incident", says François Pomerleau, Eng. Executive Vice President at Alliance Formwork, main formwork contractor. "More than 70000 cubic meters of concrete have been poored, and almost 3 million square feet of formwork have been erected, with the Linden Comansa tower cranes. Thanks to the reliability of the Linden Comansa cranes, we have completed all stages on time, which is quite a success for a big project like this!".

The Shriners hospital for children

Belonging to the Shriners network of non-profit hospitals, a new children’s hospital is under construction annex to the Glen Campus, but in a different building. Shriners hospitals welcome children with special conditions (burns, orthopedic needs, spinal cord injuries, etc) and their families, regardless of the patients can afford the treatment.

The new building will replace in 2015 the current hospital, much smaller and with no space to grow, and will be affiliated to the Glen Campus, so will have access to its services and will participate in its research. For its construction, Linden-Comansa Canada (Location Comansa) is using a 21LC290 tower crane, with maximum load capacity of 18 tons and height of 69.8 meters, and a LC5211 with maximum load of 5 tons and a height under hook of 56 meters. Furthermore, the 21LC290 tower crane was used to erect the LC5211.

The company has a large and complete fleet of Linden Comansa tower cranes, and offers full service (rental, erection/dismantling, technical support, engineering, etc) mainly in the Quebec area, although their cranes have travelled almost coast to coast, from Edmonton (Alberta) to Halifax (Nova Scotia).

The erection crew of Linden-Comansa Canada (Location Comansa) likes the easiness of erection and dismantling of the Linden Comansa cranes, resulting in work done in a safe manner and accomplishing tight schedules.