Skyjack Machines Tee Up for Charity in Miami

Scissor lifts and booms from Skyjack hit the greens at the BEA and Action Rentals’ Second Annual Golf Tournament, contributing to the event’s philanthropic goals. The awp manufacturer returned to the event for a second year as a platinum sponsor. 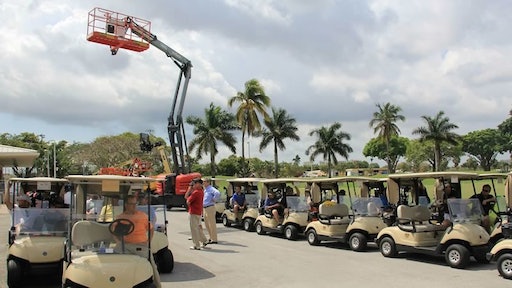 Scissor lifts and booms from Skyjack hit the greens at the BEA and Action Rentals’ Second Annual Golf Tournament, contributing to the event’s philanthropic goals. The aerial work platform manufacturer returned to the event for a second year as a platinum sponsor.

This year’s golf tournament raised over $21,000 for Centro Mater, a childcare service in south Florida that specializes in taking care of children of low income and under privileged families. Skyjack sponsored the event, and donated an additional $3,000 through its 30 FOR 30 PARTNERS campaign.

“Centro Mater is a very noble cause, and Skyjack was happy to return as a platinum sponsor,” said Skyjack Regional Vice President Pat Quint. “Not only was Skyjack able to double our donation this year, but the entire fundraiser raised twice as much money as last year.”

Held on March 16, the daylong event, which included a golfing and a silent auction, took place at Miami International Links in the Melreese Country Club. Seventy people attended including many construction industry professionals as well as school board and university members. Beyond the platinum sponsorship, Skyjack had machines available at the clubhouse, hole nine and the awards banquet for golfers to check out.

“Skyjack has been a key part in helping make this event a success,” said Bruno Elias Ramos, principal owner of Action Rentals. “I am very proud to be associated with a company that has so much integrity. Action Rentals has always found importance in giving back to the community, and it is clear that Skyjack has the same values with their anniversary campaign.”

Skyjack’s 30 FOR 30 PARTNERS campaign is a yearlong initiative to celebrate 30 successful years in business. Throughout 2015, Skyjack is donating money and machine rentals to 30 charitable projects around the world. The company has been part of the BEA and Action Rentals golf tournament for two years, helping raise funds for Centro Mater.