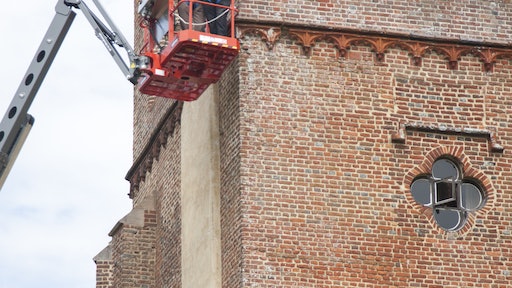 (From left to right) Dean Marks, Skyjack European sales manager, and Ian Brown from Winner Plant assess Laughton Place on the Skyjack SJ63 AJ, which The Landmark Trust used to repoint parts of the historic building.

The Landmark Trust owns and operates a variety of historical buildings across the United Kingdom and Europe, and it carefully restores or renovates each property before renting it out as a holiday let. The concept behind the charity is to preserve rare pieces of architectural history, allowing them to be enjoyed by generations for years to come. When Skyjack found out about the unique project, it was keen to get involved.

“Several sections of brickwork on the Laughton Place tower desperately needed repointing in lime mortar,” said Ed Percival, head of marketing and communications at The Landmark Trust. “Our charity prides itself on keeping traditional building skills and techniques alive, but this attention to detail comes at a price. We have to prioritise the buildings that need our help the most so we were grateful that Skyjack could step in and lend a hand at Laughton Place.”

Situated between the South Downs and Ashdown Forest, Laughton Place is an exposed building that needs regular upkeep and care to preserve its original features and ancient brickwork. Skyjack worked alongside Sussex-based rental company Winner Plant to provide The Landmark Trust with a brand new SJ63 AJ articulating boom lift, which was used by local construction contractor Traditional Buildings to repoint the structure in lime mortar.

“This project was complex, there were many things to consider before we started the work,” explained Ben Muriel, director of Traditional Buildings. “The height of Laughton Place, coupled with its remote location and jutting buttresses, meant we needed to find the right machine for the job.”

Respecting the history and traditional features of the building was especially important to The Landmark Trust. While scaffolding is the conventional way to carry out restoration work, it is often not the most forgiving to the heritage stonework.

The SJ63 AJ offered the perfect solution — Skyjack’s articulating boom lifts provide versatility in the form of their ‘up-and-over’ reach capabilities, thanks to their height, horizontal reach and up-and-over clearance. The unit’s 70-foot working height provided the operator with full access to the 59-foot-tall main building. The SJ63 AJ required no fixtures or fittings to be made to the exterior surfaces of Laughton Place, which minimized impact and ensured all the traditional features of the building were preserved.

In addition, the SJ63 AJ’s axel-based four wheel drive and dual fuel engine options delivered excellent power, torque and terrainability, which enhanced productively and manoeuvrability as the operators worked on the uneven ground around Laughton Place.

“Completing the project in just seven days was very important to us. The SJ63 AJ eliminated the need for scaffolding, which in turn meant we didn’t need to hire a lot of people to complete the lime mortar repointing,” Percival said. “Instead, just a couple of operators used the Skyjack machine to quickly and efficiently repair parts of the building’s façade, greatly reducing the project’s overall costs.”

As a charitable organization, The Landmark Trust relies on the money raised from its property lets to fund the much-needed renovation projects — such as the one at Laughton Place. Thanks to the SJ63 AJ, productivity on the jobsite was maximized, helping to keep costs and manpower on the jobsite low while completing the maintenance work quickly so the building could return to full use.

“The Landmark Trust does great work in helping to keep little gems of architectural history alive, across the UK and Europe,” said Dean Marks, Skyjack’s European sales manager. “We were captivated by the idea of helping to preserve a landmark that people will still be able enjoy for years to come. Laughton Place is a special building, there is so much history tied up in it — it’s important to keep buildings like this one alive.”

Sir William Pelham built the tower at Laughton Place in 1543; since then it has served as a family home to two former 18th century British prime ministers and an observation post during World War II. The Landmark Trust acquired the historic site in 1978.

“Skyjack is searching for projects that really matter to the local community; we want to offer monetary or equipment donations to the customers and community that have supported us for so long,” Marks said. “Helping the Landmark Trust preserve Laughton Place has been a special privilege — it’s something Skyjack is proud to have been a part of.”

Skyjack Machines Tee Up for Charity in Miami

Skyjack and Interstate Aerials Team Up for Little Smiles