Known for his drive and determination, Moore's career left a lasting impact on the global work at height industry. His imaginative designs and pursuit for quality helped to shape the industry in its infancy and set standards still followed today. 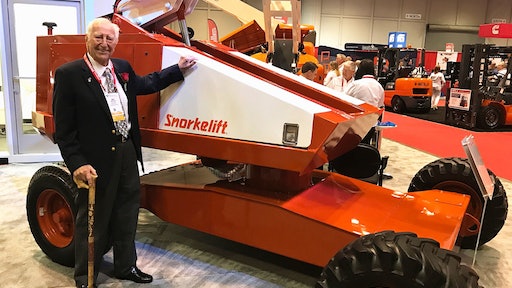 Art Moore, the founder of Snorkel, a current Snorkel board member, and a pioneer in the access industry, passed away on June 19, 2019.

"We have been incredibly fortunate to have been graced with Art's innovative vision, insightful wisdom, whimsical humor and cheerful personality for 94 years," a company release states.

Known for his drive and determination, Moore's career set an extraordinary example and left a lasting impact on the global work at height industry. His imaginative designs and pursuit for quality helped to shape the industry in its infancy and set standards still followed to present day.

Developing 17 industry-defining models in less than a decade, Moore built the foundation for Snorkel, today a leading global manufacturer of aerial lifts. He was probably most well known for the Snorkel TB-42 telescopic boom which became a standard in the industry for many years, as well as the introduction of the first ‘big boom’ which reached 126 ft. His vision will continue to influence the company he started 60 years ago and the industry he changed for the better with his innovations.

Over the years, Art’s industry contributions have been recognized with honors like the International Awards for Powered Access Lifetime Achievement Award in 2016, and induction into the American Rental Association’s Hall of Fame in 2017. Following the acquisition of Snorkel by Don Ahern in October 2013, Art became a Snorkel board member providing his global insight and product knowledge.

“For many years, Art Moore was a mentor to myself and others in the early years of the access rental and dealership business, and he ultimately became a close friend," said Don Ahern. "He will be a great miss to Snorkel and the wider industry, and I send my sincere condolences to Sue and family at this difficult time.”

Moore's legacy extends beyond his outstanding achievements in the access industry. He lived for adventure, traveling around the globe, and never shying away from adrenaline with friends and family by his side.

Biden's two-step plan for rescue and recovery in our nation includes presenting his "Build Back Better" plan to Congress in February. The plan includes $2 trillion in spending over four years for infrastructure.
Jessica Lombardo
Jan 15th, 2021

Fleet owners and operators should remain vigilant and continue to conduct all required inspections and maintenance to maximize productivity and ensure operator confidence in the field.
JLG Industries Inc.
Dec 22nd, 2020

Custom Equipment appoints Terry Dolan to a board of director's role, removing his responsibility as president and CEO, to maintain his insight into the overall direction of the company.
Hy-Brid Lifts / Custom Equipment LLC
Jan 4th, 2021

Alta Equipment Group signed a definitive agreement with Vantage Equipment, taking over the distribution of Volvo CE products in most of New York, the counties and boroughs of New York City, and Long Island.
Alta Equipment Company
Dec 22nd, 2020

TVH received the Material Handling Equipment Distributors Association's Most Valuable Supplier (MVS) Award for 2020, which recognizes companies who have demonstrated a commitment to their dealer network, their employers, and their community.
TVH Parts Americas
Dec 21st, 2020

The Manitou Group will cease operations in Waco, Texas, at the end of March 2021 and consolidate most of the production in South Dakota, while assisting 148 employees with job searches.
Manitou Americas Inc.
Dec 16th, 2020

PAL provides audio and visual warnings when controls are engaged and the lanyard has not been attached to the lanyard anchor in the bucket. The system is designed to reduce the chance of an operator elevating the bucket without a lanyard attached.
Terex Corporation
Dec 15th, 2020

Jeff Stachowiak shares his expertise on the new ANSI Standards that went into effect in June 2020.
Sunbelt Rentals
Dec 15th, 2020

The Grove GMK5250L all-terrain crane was used to create a machinery warehouse's roof at a mining facility in the Peruvian Andes by lifting roof segments over massive oil tanks.
Manitowoc Cranes
Dec 11th, 2020