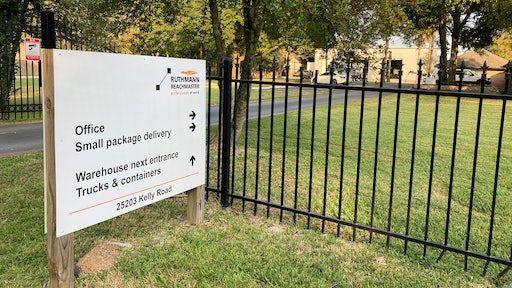 The company recently presented their new company logo, which now represents both companies and its long history. Ebbe Christensen, president of the new company, explained, “It is always a very exciting process to create a new logo that represents the unity of two companies, yet it is also a challenge to reflect both sides." He joked, “It is almost like finding a name for a new baby that represents the personality and heritage of both parents."

The result was a combination of the two company logos, where the colors from the RUTHMANN side were combined with the strong symbol of the former ReachMaster logo — the falcon image. It dates back to the 1930s when it was the symbol of the Danish family name of the company that later invented the compact lift segment. The RUTHMANN side goes even further back to 1901 in Germany.

“So we had indeed some history to respect here, and we are very proud to present the new logo that will represent our future combined efforts and success in North America," concluded Christensen.

Recently, the new logo found its way to the former ReachMaster location in Porter, Texas that became ReachMaster‘s new headquarters a couple of years ago.

“Like so many other things in these COVID-19 times, getting the new building signs in place took a little longer than expected, but we are proud to now fly the new colors of the new company on not only our equipment, but also our base here in south Texas," added the newly promoted service manager Robert Parkerson. "Thankfully, it was not difficult to find proper lift equipment to install them."