A Bronto S230XDT aerial platform was delivered to NASA’s Jet Propulsion Laboratory’s facility in Goldstone to enable inspection and maintenance of high-tech antennas. 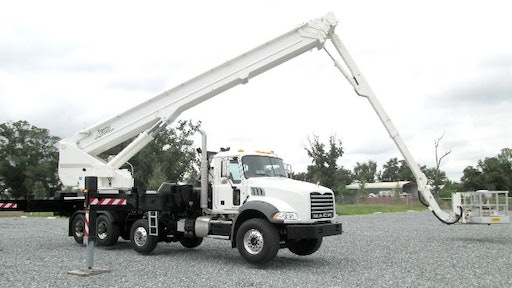 Aerial work platforms are regularly used to maintain telecom antennas, but not all antennas are the same. For example, the Deep Space Network (DSN) operated by NASA’s Jet Propulsion Laboratory (JPL) is the largest and most sensitive scientific telecommunications system in the world. A Bronto S230XDT aerial platform was delivered to NASA’s JPL facility in Goldstone, California, to enable inspection and maintenance of these high-tech antennas.

JPL operates three antenna tracking complexes around the world: the Goldstone location in the Mojave Desert, one outside of Canberra, Australia, and one outside of Madrid, Spain. The antennas regularly communicate with the two Voyager spacecraft outside of our solar system, the New Horizons spacecraft that went past Pluto, the Juno spacecraft orbiting Jupiter, the multiple spacecraft and landers at Mars, the Parker Solar Probe orbiting the Sun, and many others. The three complexes are located approximately 120 degrees apart in longitude, so that as the Earth rotates, one set of antennas is always in view of the spacecraft.

At each complex, there are multiple antennas that have a reflector 112 feet in diameter and one antenna that is 755 feet in diameter. These large antennas present a maintenance challenge, as it's difficult to get staff up and down the structures to service and maintain the critical equipment.

JPL has two Bronto Skylift aerial platforms to assist with this work. California has strict limitations to vehicle axle weights, and the S230XDT’s configuration was tailored to fulfill these regulations through collaboration with the local dealer, Excel High Reach, the chassis manufacturer, and the end customer.

The Bronto is a S230XDT aerial mounted on a Mack chassis, featuring a 230-foot working height, 118-foot horizontal outreach, and 1,500-pound maximum load in the working cage. Optional equipment includes power outlets in the cage, various working and warning lights, a wireless intercom between the cage and the turntable, and a 360-degree continuous rotation of the turntable. The unit provides access up and over the end of the bowl-shaped reflector and then use the last section of the mast in a horizontal condition to access the microwave equipment that is located near the center of the dish.

Information provided by Bronto Skylift and edited by Alexis Brumm.