Andy Studdert, interim CEO and MD of the International Powered Access Federation used his closing remarks at the Europlatform 2019 to pay tribute to departed IPAF President Brad Boehler, who stepped down after leaving his role at Skyjack. 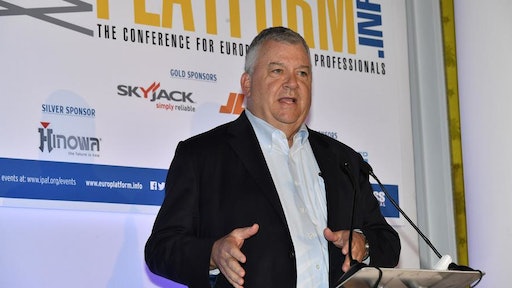 During his closing remarks at the Europlatform 2019 conference, Andy Studdert, interim CEO and MD of IPAF, paid tribute to former IPAF President Brad Boehler, who recently stepped down after leaving his role at Skyjack.

Boehler holds directorship with Serious Labs, another IPAF member firm, though it is not a member with full voting rights. Under IPAF's operating rules, he was unable to continue to serve on the Board and as President of the federation.

“We’d like to thank Brad Boehler, who stepped down as IPAF President yesterday, for all his hard work, leadership and dedication to safety over many years in the industry," Studdert says. “He had wanted to carry on as IPAF President, but when it emerged on close reading of the IPAF operating regulations that he wouldn’t be able to do as hoped, he did the honorable thing and stepped down from the IPAF Board and therefore the Presidency.”

Studdert continued to show support for Boehler, saying that his stances on safety and record growth year-on-year with Skyjack leaves him in great stead.

“All of IPAF’s members operate their businesses according to the rules, so when Brad discovered he wouldn’t be able to carry on as IPAF President, he put aside his personal disappointment and acted in compliance with the technical requirements of the operating rules," Studdert comments. “We’d like to thank Brad for all the work he’s done and wish him well in his future career; he’ll no doubt be a huge asset and driving force in whatever endeavour he turns to next. We hope he decides to continue deploying his talent and determination in powered access and continues to lead in making our industry even safer.”