IPAF has given more feedback to the UK All Party Parliamentary Group APPG of MPs inquiry into working at height, as well as senior representatives from the UK Health & Safety Executive. 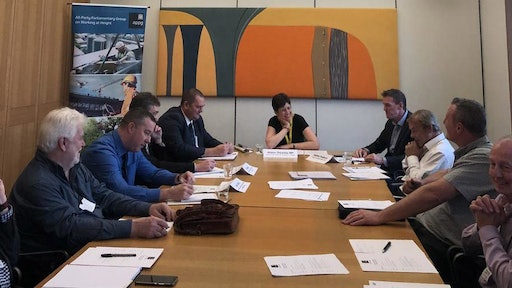 The International Powered Access Federation (IPAF) has given more feedback to the UK All Party Parliamentary Group (APPG) of MPs inquiry into working at height, as well as senior representatives from the UK Health & Safety Executive (HSE), at a recent meeting in Westminster.

The presentation included an overview of IPAF’s global reporting project of accidents and near-misses involving mobile elevating work platforms (MEWPs), and also sought to emphasize the emotional impact of accidents when using the equipment, especially when platform operators or occupants are killed or suffer life-changing injuries.

“It was very useful for IPAF to impress upon the HSE the emotional impact of accidents, the need for better data and why we need to make navigation of data much easier to improve safety across the board,” Richard Whiting comments. “This particular meeting was on the subject of enhanced reporting, following one of the key recommendations in the APPG’s initial Staying Alive report. It was subsequently announced that changes to the RIDDOR reporting system will aim to make data collection easier, which in turn will encourage better reporting and ultimately help make the data more useful when setting best practice and implementing safety strategy.”

Delahunt took the group through IPAF’s reporting project and emphasized the ongoing work to gather more data on near misses, and new ways to share the analysis, including a new and detailed annual report that is due for publication shortly.

“Accident reporting and in particular the gathering of data on near misses or accidents where no-one was badly hurt are key to analyzing and understanding the whole picture when looking at common causes of accidents while working at height,” Delahunt says.

The APPG, led by Alison Thewliss MP, continues to invite expert testimony following the publication earlier this year of its Staying Alive report. Among the APPG’s initial recommended steps to curb falls from height in the workplace were improvements to the RIDDOR system to better capture data specifically on falls from height, to create a more detailed picture of the number of falls that occur and the reasons behind them.

“IPAF has been updating the way it analyses and shares the data it collects, and so it was useful to be able to share this experience with others including representatives from the HSE, to hopefully aid with making the suggested changes to RIDDOR as outlined in the key recommendations of this inquiry. This was a very worthwhile meeting and we look forward to continuing to engage with the APPG on the issue of reducing risk while working at height,” Delahunt says.