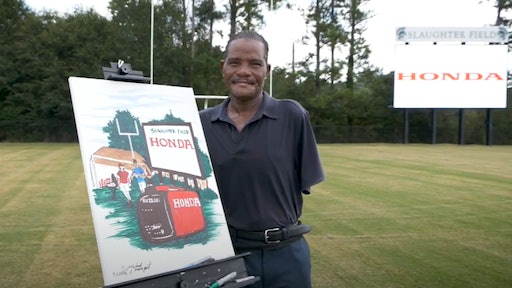 Davenport is an artist who taught himself to draw after losing his arms in an accident when he was a teenager. The 54-year-old artist, who draws by holding colored markers in his mouth, not only overcame his disability but established a career in drawing. He developed a fan base in Georgia for his drawings of University of Georgia icons such as Athens landmarks and Uga, the beloved Georgia Bulldogs mascot.

The Honda Power Equipment social media team selected Davenport as an honoree because of his determination and perseverance in overcoming a disability. The company shot and produced a video telling his story, housed on the Honda YouTube channel, noting how he has become a hero because of his work.

National Disability Employment Awareness Month is part of the Honda Power Equipment Diversity and Inclusion series. The initiative acknowledges that difference is a common denominator of the human race and embraces the contributions of many cultures to the company.

“Honda founder Soichiro Honda said that his vision was for Honda to be a company that society wants to exist—meaning that Honda would create products and technologies that improve people’s lives, minimizing the environmental impacts of its products and business operations to ensure a sustainable future for society. And sustainability includes diversity in our workforce and supply chain,” said William Walton, vice president, Honda Power Equipment. “Today, this concept is a guiding principle behind the Honda brand essence, and Mr. Davenport is an example of how we see each other as equals in business and beyond.”

The Honda Power Equipment Diversity and Inclusion Series is part of Soichiro Honda’s vision to see each other as equals in business and beyond. In addition to National Disability Employment Awareness Month, Honda Power Equipment recognizes Black History Month, Women's History Month, Asian Pacific Heritage Month, Pride Month, and Hispanic Heritage Month as a part of its social media Diversity and Inclusion Series.

Davenport’s drawings can be found in Athens, Georgia, at his studios on sidewalks, and in other public places. His work for Honda Power Equipment will be on display at the company’s Alpharetta, Georgia headquarters.

“I didn't know I was going to become an artist, but I started drawing after I learned how to write my name. I credit my higher power for helping me make the best of life,” said Davenport. “My advice? Sometimes we can be our own worst enemies. If you want to pursue something, don’t hold yourself back.”

Jolene Logue discusses her journey in climbing the ladder from entry-level jobs out of college all the way up to her current role as president of PacWest Machinery of Seattle, an Atlas Copco Power Technique distributor.
Atlas Copco
March 9, 2021

Aggreko provides Gold Fields' open pit mine with a power solution in Chile, Latin America — leading to savings of $700,000 per year in energy costs and 10,511 tons of carbon savings.
AGGREKO - PEARLAND, TX
January 28, 2021