Balancing Generator Power to Performance Provides Up to 50% Fuel Efficiency 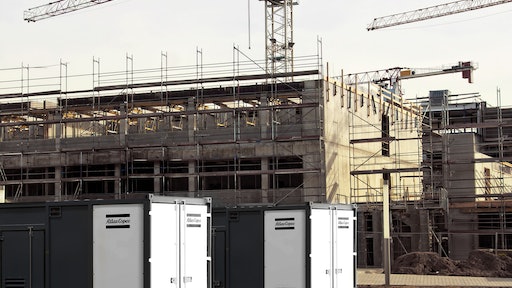 Power. It’s a necessity that keeps the lights on and equipment running in every building and jobsite. But, in some cases, it’s the true lifeblood of an operation, and an outage can be downright costly in critical operations such as asphalt or concrete plant or mines and large construction sites. In scenarios like these, it’s especially important to have consistent and reliable power. And while specifying the right size generator is a good starting point, one might find there’s greater dependability, cost savings and efficiency in numbers.

Ever since the advent of portable generators, it has been common practice in many prime power applications to choose a single generator with enough kilowatt (kW) output to power all of the tools and equipment needed. While this certainly serves the immediate need, paralleling several smaller generators to operate in parallel might be a more efficient and versatile option.

The synchronizing process — which once involved a vast network of wires, manually adjusting the rpm, and frequently monitoring the loads — is now fairly simple with most portable generators. In fact, some generators feature “plug-and-play” technology that allows the control to be connected with just one cable. After the connection is made, the user connects the power cables to a common busbar, then hits the start button and the process takes care of itself.

Plug-and-play models feature a special controller that creates a power management system to oversee all of the units. They are often equipped with motorized breakers that allow the units to automatically start and stop as loads fluctuate. Users can parallel as many as 16 generators with some manufacturers’ models, and much quicker than they could with older models.

Synchronizing generators for use in prime power applications, such as asphalt and concrete batch plants or construction sites, is common practice in many other countries, but is just starting to be better utilized in the US Many contractors simply have been unaware of the better power options it presents. Just like in many common standby applications, synchronizing generators on these sites can come with many benefits.

Perhaps the biggest advantage of paralleling two or more single megawatt generators is peace of mind.  The operation won’t be completely shut down if one unit breaks down. A complete loss of power can be disastrous. For example, if there is hot asphalt in a hopper and the lone generator on site goes down, operators can be faced with a tough situation. As the asphalt cools it begins to harden and can damage equipment. It’s also extremely difficult and time consuming to remove. Boring and drilling applications also are a good example. If a standalone generator goes down as drilling takes place, the tool can become stuck and can be challenging and time consuming to remove. On the other hand, if these jobsites are equipped with several smaller generators in parallel, operators can simply take one out of service and use the remaining generators with little to no impact on the operation.

Reduced fuel consumption is another significant benefit. For example, let’s say a worksite needs 5-megawatts of power to operate numerous pieces of equipment. Five 1-megawatt generators that are paralleled can provide the same amount of power as two 2.5-megawatt generators, but can automatically power down as usage decreases and power up as it increases. Also, as the load falls below certain levels on some larger generators so does the fuel efficiency. For example, if the load requirement falls to 1 megawatt, a 2.5-megawatt unit will operate at 30% fuel efficiency, while a 1-megawatt, on the other hand will operate at as much as 50% fuel efficiency. This can lead to better efficiency and considerable fuel savings.

Many models allow users to customize the power management system to a large range of parameters. For instance, let’s say a jobsite has five paralleled 1-megawatt generators that will run near full power during periods of the day, but at other times the load is just 1/2-megawatt. Users can program the power management system to operate with the minimum power, plus one additional unit. Adding the 1-megawatt ensures they’ll have continuous, stable power so productivity won’t be affected in the case of power surges. Operators also can choose to have all of the generators run continuously at the same time to constantly share the load.

Several smaller generators also give site managers the flexibility to use them separately in different areas on the jobsite or on jobs at other locations. They also can be significantly less costly to purchase or rent than their larger counterparts.

When choosing generators to be paralleled for prime power applications, take the same considerations as in standby applications: altitude, ambient temperature, amperage, voltage, motor starting method and surge capacity. But keep in mind that the power ratings for generators in prime power applications are generally 10 percent lower than they are in standby applications. It’s also a good idea to choose units that are easy to use. Plug-and-play designs are the most user-friendly and are a great alternative to more complicated generators, which can require several cables for connecting units and external switchgear and specialized personnel. This all adds up to more costs, hassle and time.

Generators with Tier 2 flex engines are significantly more economical than those with Tier 4 engines, since they require several components to treat exhaust. But keep in mind that Tier 4 models are more environmentally friendly and the way of the future. If cost is a concern, refurbished machines might be a good alternative to new, but keep in mind local emission requirements.

Many manufactures also offer options for use in high altitudes or extreme weather conditions. Some cold-weather features include alternator and coolant heaters and synthetic 0W-40 engine crankcase oil, which maintains the appropriate viscosity during the colder temperatures.

Other cost-saving components are absorbed glass mat, or AGM, batteries. AGM batteries are virtually maintenance free since they don’t require users to replenish electrolyte or use hydrometers to perform specific gravity checks on the battery’s charge. In addition, they are completely sealed so there is no risk of spills or leaks that can damage equipment and burn skin.

With numerous pieces of equipment operating simultaneously on jobsites, noise pollution can be another concern. Look for units that have low decibel ratings that have been sound attenuated at the factory and rated.

In addition, rather than placing larger generators in a standard ISO shipping container, some manufacturers build them into 20-foot enclosures they design and build from the ground up. This allows them to make the unit structurally sound to accommodate features such as larger openings for maintenance as well as control panels on the outside of the unit; features that would otherwise weaken the integrity of ISO containers. Instead they are safer and easier to use while maintaining the same footprint and form factor of the ISO containers.

The exterior control panel gives operators the flexibility to move the control panel up if it’s placed at ground level or down if it’s placed on a trailer, which will ensure it stays at an ergonomic height for operators. It also eliminates the time and hassle associated with getting on and off of a trailer and opening doors to make adjustments, which increases the risk of injury from moving parts and hearing loss from the equipment.

Manufacturing their own ISO-spec enclosure also allows manufactures to incorporate features that make maintenance easier and faster. For example, some generators have all fluids plumbed to the edge of the unit. This eliminates the hassle and time associated with trying to place drip pans in the unit where space is very confined. Instead, users can simply go to one convenient location and can even use hoses to divert the fluids where needed.

Some generators also are equipped with large access doors that swing completely open to give operators more room to work. They may feature one-side accessibility to every maintenance point so users don’ t need to spend time moving from one side to the other, which helps maintenance go even faster. And to make larger repairs easier, most units can be completely removed from the enclosure for full access to maintenance points.

Also consider the maintenance intervals. Some manufacturers require preventative maintenance every 250 hours, but in recent years, others have extended that to 500 hours. This is possible because of several features, such as oversized fuel and oil filters and larger oil pans. Fewer maintenance intervals can have a significant impact on maintenance costs and total cost of ownership, particularly on sites with heavy use. And if site managers are using the generator as a standalone unit, this also reduces downtime.

From Site to Structure

Power is essential to every building and jobsite. But in critical prime power applications it can make or break the productivity of the operation. While a single large generator can provide clean, stable power, several smaller generators that are paralleled add up to even more, from increased efficiency to greater reliability to improved cost savings. Now that’s smart power.

Jim Siffring is the product manager for Atlas Copco Construction Equipment’s generator product line. He has more than 15 years of experience working with generators and is based out of Atlas Copco’s U.S. headquarters in Commerce City, Colorado.

The Memorial Day deadline for sweeping legislation to repair our crumbing infrastructure has passed. Democrats and Republicans are still working to reach an agreement. But big differences remain, and time is short.
Jessica Lombardo
Jun 16th, 2021

These new enclosures are specially designed for standby, peaking, and combined heat and power (CHP) application requirements and can operate seamlessly with other generators.
Cummins Inc.
Nov 12th, 2020

Compact and high-performance generators are built with the same characteristics as the rest of the QAS lineup.
Atlas Copco Power Technique
Oct 8th, 2020

The solar trailer is for use in conjunction with the POWRBANK Renewable Power System.
POWR2
Sep 14th, 2020

Option designed to eliminate potential for wet stacking and the associated damage and performance issues it can cause for diesel generators
Doosan Portable Power
Mar 18th, 2020

Designed specifically for the North American rental market, the RS Generators were made to be safe, easy to use and incorporate as much technology and information at a users fingertips as possible.
JCB
Feb 11th, 2020

Built with the same characteristics of the CPG line, Chicago Pneumatic's fuel-efficient CPG 625 model is compact, lightweight and ideal for a wide range of applications.
Chicago Pneumatic Power Technique
Dec 12th, 2019
Follow Us