Construction Unemployment Jumps to 16% in December 2011

December added 17,000 construction jobs but the unemployment rate still jumped from 13.1% to 16% 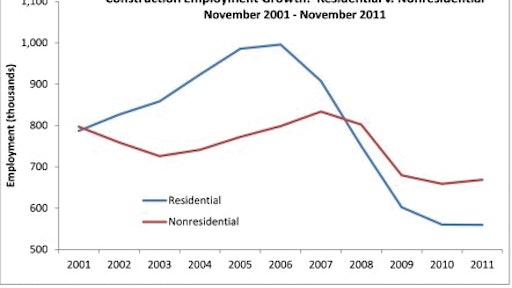 Despite the addition of 17,000 jobs in December, the nation's construction industry unemployment rate jumped to 16 percent last month, a sharp increase from 13.1 percent in November but down from 20.7 percent the same time last year, according to the Jan. 6 jobs report by the U.S. Labor Department.

Nonresidential specialty trade contractors added 20,000 jobs in December and have added 12,000 jobs, or 0.6 percent, during the past twelve months. In contrast, residential specialty trade contractor employment decreased by 3,000 jobs for the month but is up by 16,000 jobs (1.1 percent) from December 2010. Heavy and civil engineering construction employment remained unchanged for the month and has added 11,000 jobs (1.4 percent) during the course of 2011.

"The increase in construction unemployment is primarily associated with seasonal factors and should not be interpreted as evidence of industry decline," said Associated Builders and Contractors Chief Economist Anirban Basu. "Today's employment numbers exceeded consensus expectations of 155,000 jobs created in December. This was the best overall employment performance for the U.S. economy since 1999, when the nation added 294,000 jobs.

"The U.S. economy is enjoying resurgence, one that has begun to encompass the nation's construction industry," Basu said. "Overall, unemployment is now at its lowest level since February 2009.

"As a result, the construction labor market enters the new year with more momentum than has been the case since at least 2007," said Basu. "While major economic headwinds remain, including elevated levels of distressed properties and disciplined lending, the worst appears to be behind the U.S. construction industry.

"However, a cloud continues to hang over a reasonably sunny employment picture," said Basu. "The U.S. labor force continues to shrink. If that were not occurring, unemployment would not have fallen nearly as quickly in recent months.