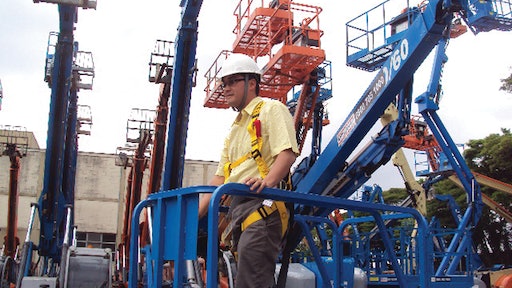 “I very much enjoyed doing the IPAF training; it is really amazing and very useful,” said Sérgio Kariya, Mills rental division managing director. “In the past, I have had other training and familiarization with AWPs and it is now clear what the differences are and what makes the IPAF program stand out. The IPAF training is very well organized and makes it simple to understand all the potential risks of operation. In the Brazilian market, which is growing almost 40% per year, safety and training is mandatory.”

Mills is the largest rental company in Brazil, one of the fastest growing AWP markets in the world. IPAF started making inroads into Latin America early last year, setting up an office in Chile, which is managed by IPAF representative Romina Vanzi. The Federation has quickly built up a base of about 15 members and 10 approved training centres, including Mills, which was the first to start IPAF training in Brazil. An IPAF Brazilian Country Council was established in June 2011, with the aim of implementing national activities that underpin and promote the safe use of powered access. The Brazilian Council is currently chaired by Marcelo Yamane, technical manager of Mills.

“It is superb that Sérgio chose to do the IPAF training and to lead by example,” noted IPAF CEO Tim Whiteman. “Congratulations to him on taking the time to do the course and on passing the test to join the thousands of people who hold a PAL Card.”

IPAF’s PAL Card operator training program is certified by TÜV as conforming to ISO 18878. Training includes as standard a theory session followed by a written test to gauge knowledge, and a practical session ending with a practical assessment of operating skill and ability. More than 95,000 PAL Cards were issued last year through a network of over 450 IPAF-approved training centres worldwide. A valid PAL Card is proof of training and shows that the holder has been trained to operate powered access equipment safely and effectively.