IAPA Award Winners Announced in Rome, 2013 Ceremony to be Held in Miami

Over 400 industry professionals from almost all continents including Europe, North and South America and East Asia attended the awards ceremony which took place on March 29 at the Sheraton Hotel in Rome, Italy. 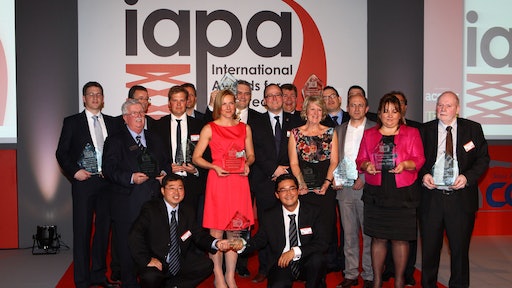 Brazilian rental company Mills Rental was the winner of the Rental Company of the Year at this year's International Awards for Powered Access (IAPAs), held in Rome last week.

Lifetime Achievement Awards were presented to Gerhard Hillebrand, IPAF's Italian representative and, posthumously, to Lars-Petter Godenhielm, who was a past president of IPAF and managing director of Dinolift.

Over 400 industry professionals from almost all continents including Europe, North and South America and East Asia attended the awards ceremony which took place on March 29 at the Sheraton Hotel in Rome, Italy.

Other winners included Alimak Hek for the Access Project of the Year on the Garibaldi Porta Nuova project in Milan, and Nationwide Platforms for Contribution to Safe Working at Height.

The four Product of the Year categories were won by Manitou for the 280TJ telescopic boom, Edmolift for the Air, Ruthmann for theT330 truck mount, and Geda for the Multilift P18S hoist.

The IPAF Safety Champion of the Year was Austin Baker of AFI-Uplift, while the award for Outstanding After Sales Service was won by TVH.

The new award for Access Photograph of the Year was won by Uwe Schneider of German rental company Mateco for a shot of one of the company's Teupen XTG 230s cleaning the glass roof of the Medical Association building in Hanover, Germany. The work is being carried out by Hayko May Cleaning Company, based in Einbeck, Germany.

The IAPAs are jointly organized by Access International and IPAF. The 2012 awards were sponsored by Italian manufacturer Co.Me.T Officine (headline sponsor), Henderson Insurance, Hinowa and Platform Basket (supporting sponsors). Genie sponsored the IPAF Training Instructor of the Year and JLG sponsored the IPAF Safety Champion of the Year.

The next IAPAs will be held on March 26, 2013, in Miami, FL. Watch for event details at www.iapa-summit.info

The full list of winners and the citations from the judges were as follows:

Mills Rental, Brazil (Access Rental Company of the Year)
The winner in this category was chosen for its outstanding work in developing an access rental company in a young market. This winner has made a significant contribution to encouraging its country of operation to embrace powered access and safety. It is helping to expand the market with a disciplined approach to growth in a rapidly developing region.

Lars-Petter Godenhielm was a great entrepreneur and good to do business with, as well as being a huge supporting force to the industry, through his work with industry regulations and with IPAF.

Gerhard Hillebrand is a nurturer and guiding hand to all those in the industry, giving generously of his time and knowledge to support the development of individuals and companies in powered access and building IPAF Italy into a very active organisation.

Austin Baker, AFI-Uplift (IPAF Safety Champion)
The judges chose this year's winner for the work he has done with IPAF and for his commitment to promote safety. The judges were particularly impressed that, despite his own life's challenges, this year's Safety Champion is willing to share his experience, effort and expertise to create solutions for the common good and not for his own, or his company's gain.

Nationwide Platforms, UK (Contribution to Safe Working at Height)
This year the judges chose to give the award to a company which promotes the safe use of platforms at all levels with service, internal and external training, and innovation.

Alimak Hek - the Garibaldi Porta Nuova project, in Milan (Access Project of the Year)
The judges said of the winner: "They have provided an elegant solution to a complex engineering challenge, which required the use of a broad variety of equipment."

Manitou - 280TJ telescopic boom (Product of the Year - Self-Propelled Booms, Scissors, Atrium Lifts)
The judges thought that this carefully designed machine made it a class leader, which demonstrated top levels of engineering.

Ruthmann - Steiger T330 (Product of the Year - Vehicle/Trailer Mounted)
The judges felt that the outstanding precision engineering, R&D, stress analysis and materials work that contributed to getting such an impressive working envelope on a 7.5 tonne chassis made this machine a worthy winner.

Geda-Dechentreiter - Multilift P 18 S (Product of the Year - Mast Climbing Work Platform/Hoists)
The judges said that they chose this product because it is an innovative solution for end users.

Edmolift - Air (Product of the Year - Low-Level Access)
The judges chose this winner because they believed the company has successfully fulfilled its ambition of producing an outstanding product designed specifically for non-industrial end users.

TVH (Award for Outstanding After Sales Service)
The judges said that the winner is an easy company to do business with. Its logistics organisation is amazing and now the access industry enjoys the same availability of parts and levels of service that the forklift industry has had for years.

Uwe Schneider of Mateco, Germany (Access Photograph of the Year)
This photograph was chosen, not just for its artistic merit, but because it demonstrates the increasingly broad scope of applications in which professional access equipment is employed.

Kevin O'Shea, Mastclimbers LLC, USA (IPAF Training Instructor of the Year)
Of this winner the judges said, "He shows tireless energy and dedication to the development of the USA market and a huge commitment to safety and IPAF and AWPT training.”

Maquinarias Paco, Spain (Best New IPAF Training Centre)
The judges chose this company because it leads the way in IPAF training in its own country and trains operators from a number of different counties and cultures, helping to promote IPAF safety and training worldwide.