Construction Industry Unemployment at 14.5% in April 2012 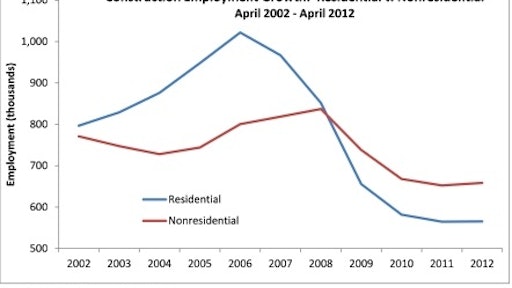 Despite a loss of 2,000 jobs in April, the nation’s construction unemployment rate fell to 14.5 percent, down from 17.2 percent in March and 17.8 percent in April 2011, according to the May 4 employment report by the U.S. Labor Department. Year over year, the construction industry has added 63,000 jobs or 1.1 percent.

“Today’s employment report represents the latest in a number of data releases indicating that the momentum in nonresidential construction does not carry into the new year,” said Associated Builders and Contractors (ABC) Chief Economist Anirban Basu. “While overall construction employment was down just 2,000 jobs for the month, payrolls at nonresidential specialty trade contractors slipped by 8,400, an indication that more construction projects are being completed relative to construction starts.

“However, the nation’s economy has managed to regain some semblance of momentum since last September, which should ultimately translate into better news for the construction industry,” Basu said. “While today’s top-line job growth estimate of 115,000 was below the consensus estimates of nearly 170,000, previous months were significantly revised upward.

“For the second consecutive year, the nation’s economy has softened during the January-April period,” Basu said. “However, U.S. economic fundamentals are better now than they were a year ago as there is no immediate debt ceiling confrontation ahead.

“In addition, commodity and construction input prices have also been better behaved than a year ago which indicates that the broader U.S. economy, and eventually the construction industry, are positioned to expand,” said Basu.

“ABC’s Construction Backlog Indicator (CBI) predicted the current lull in construction activity,” Basu said. “It is possible that commercial and industrial construction will remain soft for a few more months. We will know more when the first quarter 2012 report comes out on May 15.”

Sustainability, digitization, and adopting new technologies are the key to coming back from the COVID-19 pandemic, says presenters at this year’s IPAF Summit, hosted for the first time as a virtual event.
International Powered Access Federation (IPAF)
July 19, 2021
Follow Us