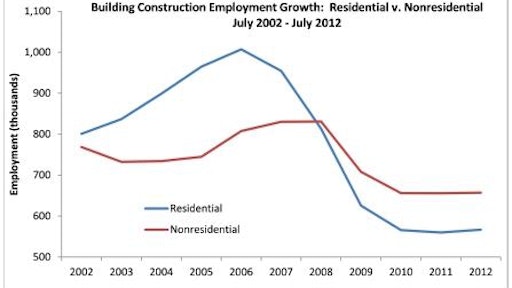 Despite a decline of 1,000 jobs in July, the unemployment rate for the nation’s construction industry dipped to 12.3 percent, down from 12.8 percent in June, according to the Department of Labor's August 3 employment report. It is the lowest rate of construction unemployment since October 2008. Year-over-year, the industry has added 5,000 jobs, or 0.1 percent.

The nonresidential building sector lost 500 jobs for the month but has added 1,500 jobs, or 0.2 percent, since July 2011. Residential construction industry employment has increased by 5,800 jobs since June and 6,900 jobs from the same time last year.

"Given the fact that construction job growth has continued to be sluggish, the primary driver behind falling construction unemployment rates appears to be that construction workers have secured employment in other industries that have been adding jobs more quickly, including distribution and manufacturing,” Basu said.

"Taking a larger view, there is the possibility that seasonal factors are partially responsible for the decline in construction unemployment,” said Basu. “However, the lack of construction employment growth is consistent with the general level of unease felt by many decision makers, including lenders. This heightened level of economic and policy uncertainty has suppressed construction starts, which in turn has constrained hiring.

"Most importantly, today's report serves to sooth fears of a near-term recession,” Basu said. “The U.S. economy remains resilient and is positioned for steady expansion during the next several months. In that case, the expectation is that the number of nonresidential construction jobs would also trend a bit higher in the foreseeable future.”