The new store is Volvo Rents’ fifth in the state of Ohio – joining existing locations in Columbus, Dayton, Hamilton and Zanesville. 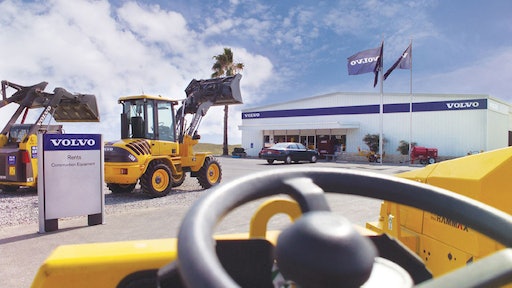 The new store is Volvo Rents’ fifth in the state of Ohio – joining existing locations in Columbus, Dayton, Hamilton and Zanesville – and will service the Cleveland Metropolitan area, including Shaker Heights, Painesville, Lorain, Strongsville and Elyria, among others.

“As the recession abates, the construction equipment rental industry is projected to be one of the fastest growing industries in North America, as more people are choosing to rent rather than commit to capital expenditures,” said Mike Crouch, vice president of business development for Volvo Rents. “Our strong brand recognition, coupled with the growing demand for construction equipment rental, allows us to look to the future with great enthusiasm.”

According to the latest data released by the American Rental Association (ARA), overall North American equipment rental industry revenue is expected to increase at least 6.9 percent in 2012 to total $33.5 billion at year end. The five-year forecast calls for continued annual growth in rental revenue to reach a total of $53.1 billion by 2016.

Another forecast by McGraw Hill Construction says the growth of construction spending in the Cleveland-Elyria-Mentor area alone is projected to total nearly $4.8 billion by the end of 2016.

In addition to Volvo Rents’ expanding line of Volvo compact equipment – such as backhoe and skid steer loaders, compact wheel loaders, compact excavators and compaction equipment – the rental center carries a comprehensive line of essential equipment and tools for the construction, commercial, industrial and homeowner markets. The focus is on daily, weekly and monthly rentals.

“We believe there is tremendous opportunity in the market, and specifically in the state of Ohio,” said Volvo Rents’ Midwest Division Manager Larry Kirkpatrick. "It just seems like dollars are moving through Cleveland, people are willing to invest here for growth.”