Convention delegates learned how to meet the management responsibilities surrounding the use of AWPs, which are one of the safest and most effective ways to do temporary work at height. 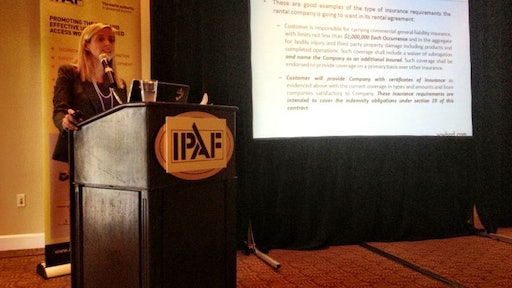 Lindsay Gatling speaks at the IPAF US Convention in Orlando.

Employers, managers and supervisors are unaware of the scope of their responsibilities when using aerial work platforms (AWPs) on jobsites, said speakers at the IPAF US Convention held at the end of October in the Orlando, FL area. Convention delegates learned how to meet the management responsibilities surrounding the use of AWPs, which are one of the safest and most effective ways to do temporary work at height.

Bryan Wimer from the National Institute of Occupational Safety and Health (NIOSH) was the opening speaker. Wimer provided an overview of research projects on aerial lifts and mast climbing work platforms that NIOSH has completed. He also stated that NIOSH has been awarded funding for a research project partnering with IPAF and Motorola to develop smart phone applications to communicate safety information to workers.

Other excellent presentations were given by attorneys Lindsay Gatling (Weinberg, Wheeler, Hudgins, Gunn & Dial) and Jim White (BoBo, Ciotoli, Bocchino, White, Buigas & Russell). Attorney Gatling examined an AWP accident that had occurred and showed that a company can easily fall afoul of the complexity of the law in its documentation, and that even when the company is not held responsible, the resulting legal costs can be substantial. Gatling provided convention delegates with a useful catalogue of lessons learned, ranging from naming the proper entity as the customer in the rental contract, to having an accident/crisis response protocol.

Attorney White highlighted the day-to-day issues that everyone should consider in the practical use of AWPs. Proper training, risk management, machine selection, equipment and site inspection, and servicing by qualified technicians are among the appropriate actions that companies should take before they have to resort to the last defense, said White. He ended his presentation with this challenge to the audience, “Would you rather take IPAF’s card for training or my card to defend you in a lawsuit?”

Other speakers included Michael Disser from NES Rentals on the hidden costs of equipment ownership; Ebbe Christensen, president & CEO of ReachMaster, on compact machines; Kevin O’Shea from Mastclimbers LLC on risk assessment; and Brad Boehler, president of Skyjack, on who or what is a qualified mechanic.

To give more practical guidance for attendees to take home, an AWPs for Managers training course was held after the Convention. Details of upcoming courses and registration (the next course being on March 25, 2013 during the IPAF Summit in Miami) are at www.awpt.org/a4m

The IPAF US Convention was sponsored by NES Rentals, Skyjack and Stephens Insurance. This educational and networking event is open to IPAF members and non-members, and will be held again in October/November 2013. Details will be posted when available at www.ipaf.org/usconvention