The equipment finance sector will surpass $740 billion in 2013, but tax and regulatory uncertainty could hamper near term business investment 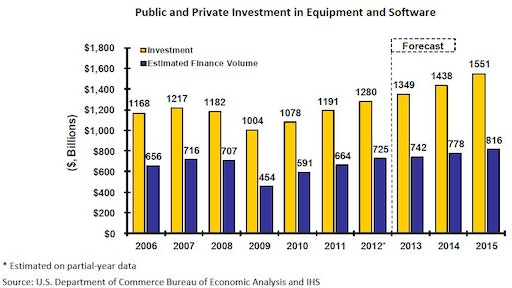 U.S. businesses and government agencies will finance more than $742 billion in equipment acquisitions in 2013, according to the U.S. Equipment Finance Market Study 2012-2013, released today by the Equipment Leasing & Finance Foundation. The study, conducted by IHS, provides a comprehensive look at the size and expected growth of the U.S. equipment finance market.

According to the study, the equipment finance sector has emerged from the Great Recession with finance volumes at an all-time high, as a result of double-digit growth in equipment investment and a favorable interest rate environment. However, equipment finance volumes are expected to expand at a more moderate pace over the next 12 to 18 months as equipment investment growth remains constrained by uncertainties at home and abroad.

Companies are expected to remain cautious about taking on the risks associated with large capital investments until after important tax and regulatory decisions impacting short- and long-term fiscal stability have been made.

The equipment finance sector is a significant contributor to capital formation in the U.S. economy. Of the projected $1.3 trillion invested in plant, equipment and software in 2013, 55 percent, or $742 billion, of that investment is expected to be financed through loans, leases and lines of credit. In 2014, the market size is projected to grow to $778 billion.

Companies with sales between $25 million and $100 million doubled their share of financing volume from 2006 - when the Foundation’s first market-sizing study was conducted - to 2011. Companies with fewer than 51 employees also doubled their share equipment acquisition via financing in this time period. This may be in part a reflection of the difficulty in obtaining other forms of credit for these segments of the market.

Cash as a method of purchasing declined for large companies from 2007 to 2012 as larger companies enjoyed greater access to credit markets. In the current low-interest-rate environment, financing equipment acquisitions is especially attractive.

Corporate perceptions of the economic outlook are the primary driver behind equipment investment decisions. When presented with a list of potential factors that will drive future investment spending, companies surveyed by the Foundation overwhelmingly chose “general economic conditions.” The financing decisions of smaller companies are especially sensitive to general economic conditions.

Even with the relatively high degree of uncertainty over the economy and regulations/fiscal policy, nearly 30 percent of companies surveyed anticipated increasing their equipment investment over the next 12 months. This group of companies is disproportionately represented by large companies. For example, among companies with sales over $100 million, 51 percent indicated they would increase spending, yet only 17 percent of businesses with sales less than $1 million had similar plans.

Over the next 12 to 18 months, businesses faced with rising uncertainty over the economy and regulatory policies are expected to be more cautious about spending on equipment and software, as well as taking on more credit. The silver lining to this cloud is that technological innovation and equipment replacement needs should spur rapid growth in volume in late 2014 and beyond.